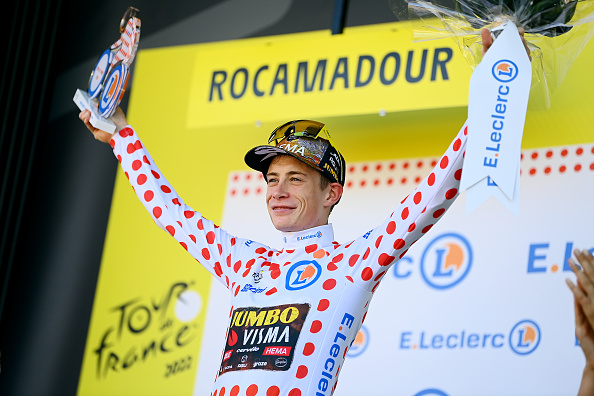 Jonas Vingegaard was poised to claim his maiden Tour de France title as the Dane retained his overall lead after avoiding a freak crash in the final time trial on Saturday.

The 25-year-old Jumbo-Visma rider finished second in the 20th stage, a 40.7km solo effort from Lacapelle-Marival won by his Belgian teammate Wout van Aert, who clocked a best time of 47 minutes 59 seconds.

There was a heart-in-mouth moment, though, when Vingegaard nearly crashed into rocks after overcooking a turn on a descent before finishing 19 seconds behind Van Aert with defending champion Tadej Pogacar taking third place, 27 seconds off the pace.

“I think I almost had a heart attack when that happened. Just when I thought I was not taking big risks, I made a mistake going into the corner,” Vingegaard told reporters.

“In the end I saved it, I'm really happy about that.”

Overall, Vingegaard leads Pogacar of Slovenia by 3:34 and Britain's Geraint Thomas by 8:13 ahead of Sunday's final stage, a largely processional ride from La Defense to the Champs Elysees in Paris.

Vingegaard set the foundations for his victory in the 10th stage after attacking Pogacar relentlessly with his teammates before the last climb up to the Col de Granon, where the Slovenian cracked and lost the yellow jersey.

Vingegaard moved closer to victory when he prevailed in the final mountain stage at Hautacam after Pogacar's all-in strategy failed to pay off, on the same climb where Bjarne Riis, the only Danish winner of the Tour, had produced one of the most stunning performances ever seen in the race.

Riis later admitted to doping to win the 1996 Tour de France, but retained his title for legal reasons.

Vingegaard's upcoming triumph seals an awe-inspiring three weeks by Jumbo-Visma as the formidable all-rounder Van Aert added three and their domestique Christophe Laporte one to the Dane's two stage victories.

Van Aert will also win the green jersey for the points classification as Jumbo-Visma take three distinctions home with Vingegaard also prevailing in the mountains classification.

Pogacar gave everything until the last pedal stroke but will reach Paris only with the white jersey for the best Under-25 rider.

In swashbuckling style, the 23-year-old fought tooth-and-nail to win a third consecutive title but his UAE Emirates team were never near the level of Jumbo-Visma, who provided Vingegaard with safety and more attacking options.

Both men were on their own in Saturday's time trial, however, but Vingegaard needed just a decent ride to preserve his massive overall lead over Pogacar.

The Dane went all-in, however, and it nearly cost him the title just before the last two competitive kilometres of the 3,350km race.

Going at over 60kph on a descent, Vingegaard miscalculated a left-hand turn and his front wheel came inches from hitting the rocky side of a hill after Van Aert was seen making 'take it easy' signs from the hot seat.

He recovered in ice-cool fashion before ending his ride more cautiously and Van Aert fell into his arms just after crossing the line.