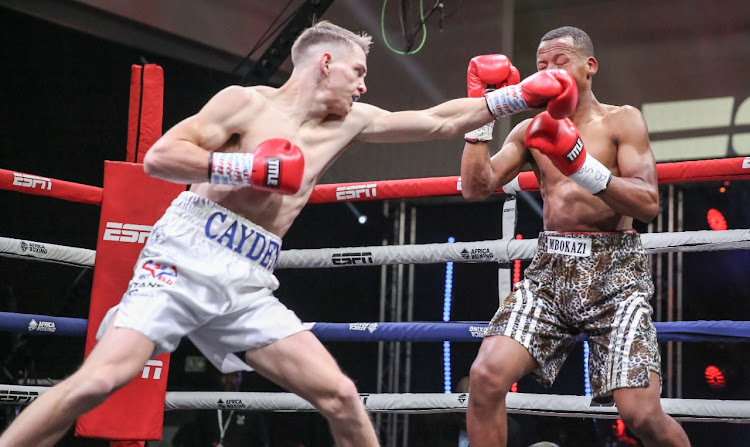 Cayden Truter lands a jab to the face of Khanyiseni Mbokazi in their contest in Sandton on Thursday night.
Image: SUPPLIED

With ducky socks on his feet and dynamite in his gloves, Cayden Truter bombed out Khanyiseni Mbokazi in the second round on Thursday night for his fifth straight win as a professional.

The first two fights on undercard ESPN bill showcased future talent, with former amateur stalwart Sinethemba Blom, who missed out on a 2018 Commonwealth Games medal by one victory, winning his debut on points in the other bout.

Junior-lightweight Truter and lightweight Blom arrived for battle at the Galleria in Sandton having travelled vastly different roads, and their journeys highlight the failing of the amateur system to deliver well-trained fighters to the paid ranks.

Blom, 29, a five-time national champion, had missed out on a possible spot at the Tokyo Olympics, not because of Covid-19 but rather an incompetent sports federation that was unable to send a team to the qualifying tournament shortly before the pandemic shut down the world.

Truter, 21, had turned professional in 2019, abandoning hopes of a glittering amateur career on the advice of his then coach, Harold Volbrecht, who had no faith in the administrators.

Three fights in 2019 were followed by two years of inactivity because of Covid-19. 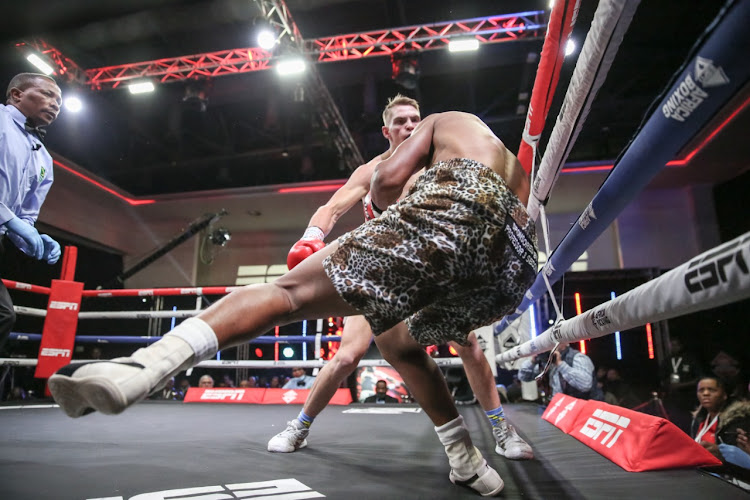 Truter’s style is as cute as his baby-blue socks with yellow ducks — he says he likes “duckies” — with fast hands, quick feet and a hell of an eye — but he demonstrated power against Mbokazi, whose record dropped to two wins, four defeats and a loss.

The Benoni-based boxer dropped his opponent twice in the second round, first with a short uppercut and then a right hand that left him senseless.

Truter, who is trained by Colin Nathan these days, is a consummate professional. Walking to the ring he stayed in the zone, even when mom Anouske patted him on the shoulder as he passed by.

Blom’s performance was less glitzy as he ground out a unanimous four-rounds points win over Sandile Dumisa, who dropped to 1-2.

Cape Town-based Blom was open to the right hand, which marked the left side of his face. At one point he looked stung. But he was better conditioned and generally landed the better punches, with his body attack being his most effective weapon.

He will need plenty of polishing — and this highlights the sad state of SA boxing. The amateurs are supposed to be a breeding ground for the paid ranks, but many pro trainers complain about the poor techniques they have to correct.

Honing skills takes time — and that’s one commodity Truter, even with two lost years, has a lot more of than Blom.