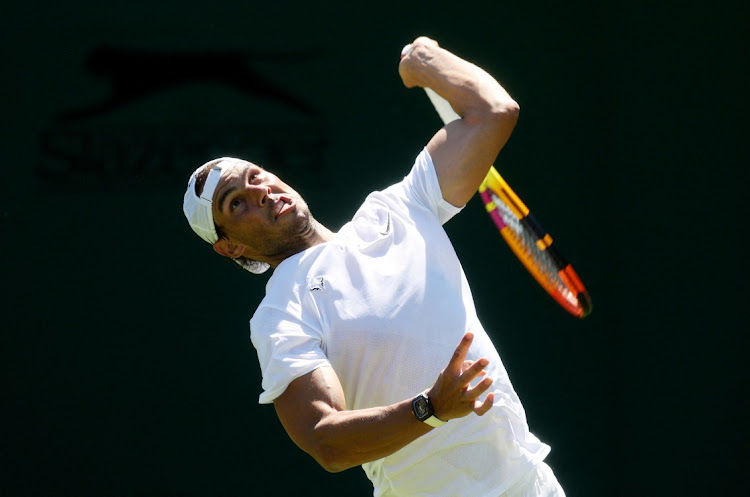 Rafa Nadal's hopes of winning Wimbledon for the first time in over a decade and staying on track for the calendar year Grand Slam will meet a familiar adversary in Novak Djokovic who is bidding to extend his domination at the grass court major.

For the first time in his career, the Spaniard has won the Australian and the French Open back-to-back and has the chance to become the first man to win all four majors in the same year since Rod Laver achieved the feat in 1969.

Serbian Djokovic finished one match short of accomplishing it last season when he won the first three Grand Slams but lost to Russian Daniil Medvedev in the US Open final.

When Djokovic won Wimbledon for the sixth time and the third in a row in 2021, it was his 20th major title — putting him in a three-way tie with Roger Federer and Nadal in the race for the most Grand Slam titles among men.

The 35-year-old Djokovic has not won a major since while Federer has not played since last year's Wimbledon.

Djokovic's fans argue that Nadal's job was relatively easier at Melbourne Park this year as he did not have to beat the Serb who was not allowed to defend his Australian Open title due to his unvaccinated status against Covid-19.

The 36-year-old Nadal, who has not played Wimbledon since his 2019 semifinal loss to Federer, beat Djokovic in the Roland Garros quarterfinals this month before going on to lift a record-extending 14th French Open title and 22nd major.

Nadal's chronic foot problem will again be in focus but his task at Wimbledon, where he won in 2008 and 2010, is expected to be more challenging with Djokovic unbeaten there for 21 matches.

With world number one Medvedev banned from taking part and second-ranked Alexander Zverev missing due to injury, Djokovic is the top seed and Nadal number two.

The duo can only meet in the July 10 final if they progress through the draw.

“Novak might probably be the man to beat because he's been doing very well,” said Eurosport pundit Alex Corretja.

“He's been winning there. He's the defending champion, and it's going to be super difficult to beat him. He serves great, he returns perfect, he moves well, he plays deep.

“So I don't think there are too many guys on the draw that really feel they can beat Novak best-of-five on grass.”

Matteo Berrettini, runner-up last year, will fancy his chances of challenging Djokovic, having won titles on grass at Stuttgart and Queen's in the lead-up.

The big-serving Berrettini has won 20 of his last 21 matches on grass with his only loss coming in the 2021 Wimbledon final.

Poland's Hubert Hurkacz will also count himself among the challengers after crushing Medvedev to win the ATP 500 grass court tournament in Halle, Germany on Sunday.

Britain's Andy Murray, who has lifted the trophy twice on Wimbledon's Centre Court, and Australian Nick Kyrgios will be unseeded threats.

Murray, ranked 51st, showed strong grass court form with his runner-up finish in Stuttgart but is racing against time to be fit after sustaining an abdominal injury during his loss to Berrettini.

The temperamental Kyrgios skipped the clay court season to prepare for grass and considers himself a top-five, top-10 level player on the surface.

The 45th-ranked Australian reached the semifinals in Stuttgart and Halle.

“If I would be in the Wimbledon draw and I would be seeded, I would pray not to play Kyrgios in the first rounds,” Corretja said.

“It's so difficult to play against him, his serve is probably one of the best on tour right now.” — Reuters