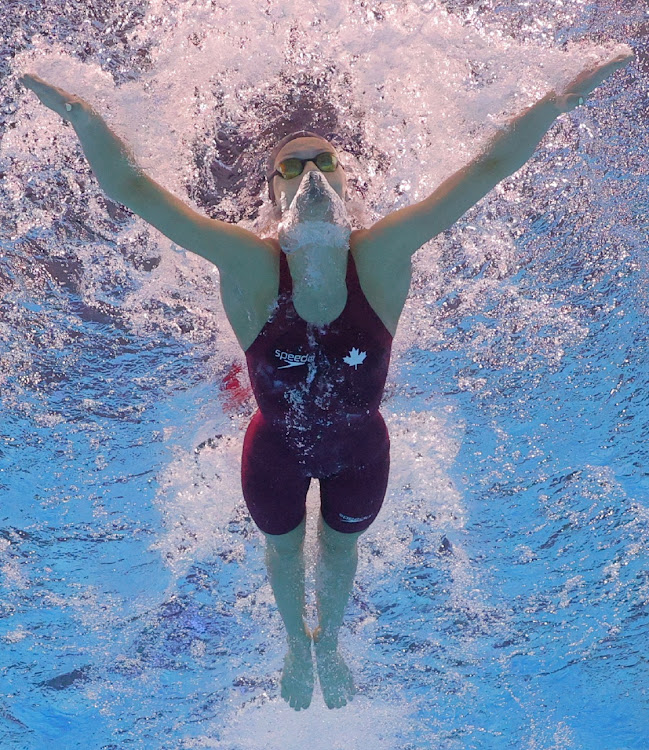 Romania's David Popovici continued his impressive championships, winning the 100m freestyle to add to his 200m gold while France's Leon Marchand clinched the medley double with victory in the 200m medley.

McIntosh won with a time of 2:05.20, beating American Hali Flickinger by 0.88 seconds and the Canadian's time was a new junior world record and added to her silver medal in the 400m freestyle. China's Yufei Zhang took the bronze medal.

The Toronto-born swimmer was the youngest member of Canada's Olympic team in Tokyo where she finished fourth in the women's 400m freestyle.

“I didn't expect to go 2:05,” McIntosh said. “But as soon as I stepped out with all the energy and excitement from the crowd, I just fed off that. I got a lot of adrenaline and motivation and put it down.”

Masse was then first to touch in the 50m backstroke, beating American Katharine Berkoff by eight hundredths of a second with France's Analia Pigree taking bronze.

There was just 0.16 seconds separating the top six swimmers in the race but Masse (27.31) was strongest in the final strokes to make up for her disappointment in only taking silver in the 100m backstroke where she was looking for a third straight world title in the event.

The much anticipated battle between Popovici, the sport's rising star, and Olympic champion Caeleb Dressel will have to wait after the American pulled out for medical reasons and missed the semis.

But Popovici again put on a show of strength and speed though he left it late to power ahead of France's Maxime Grousset, winning by six hundredths of a second with a time of 47.58.

Canada picked up another medal with Joshua Liendo Edwards taking the bronze.

Marchand followed up his triumph in the 400m medley with another impressive swim to claim gold in the 200m event, powering ahead after the breaststroke segment and holding on in the final 50m freestyle.

The US women won the 4x200m relay with Katie Ledecky powering them into the lead after McIntosh, back in the pool, had given Canada a strong early advantage.

Bella Sims held on to the lead over the final 200m as the Americans finished 2.41 seconds ahead of Australia with the Canadians having to settle for bronze. — Reuters