Hamilton takes hope on return to the podium in Canada 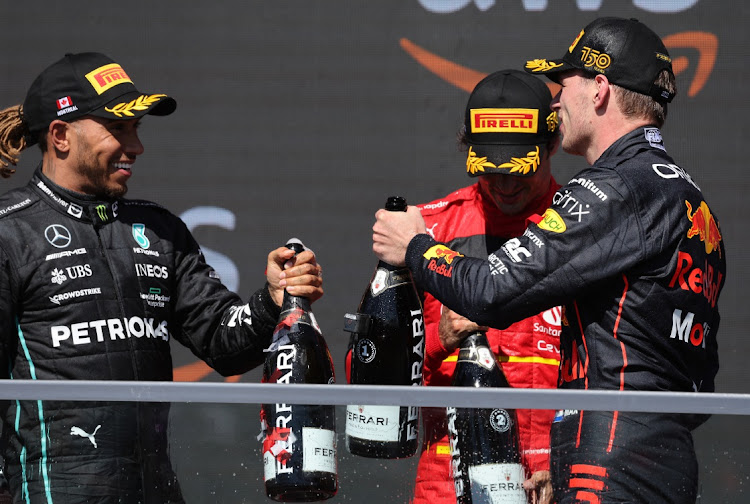 Lewis Hamilton has won 103 grands prix but third in Canada on Sunday put Formula One's most successful driver back in a happy place.

Mercedes' seven times world champion said the result, after severe back pain in Azerbaijan a week earlier in a bouncing car he had also described as undriveable after Friday practice in Montreal, filled him with hope.

“It feels incredible today to be in among the battle,” the Briton said after finishing behind Red Bull's championship-leading winner Max Verstappen and Ferrari's Carlos Sainz.

He described the outcome of his afternoon as “quite overwhelming.”

“I was kind of just about keeping up with these guys, but they pulled away at the end. But it has given me and the team a lot of hope that there's more to come from this car. The potential is truly there if we get the set-up right.”

Hamilton had not been on the podium since he was also third in the season-opener in Bahrain in March, also the last time he finished ahead of new team mate George Russell who was fourth on Sunday.

During the week he told reporters that the car was a disaster and “whatever we do to improve it just makes it more unhappy”.

Canada has always been a happy place for Hamilton, however, the circuit providing a backdrop to his first grand prix victory with McLaren in 2007, and he had qualified fourth in wet conditions.

The Briton has won seven times in Canada, a record he shares with Ferrari great Michael Schumacher, and while form suggested another was not on the cards there were moments when the fans must have begun to wonder.

Hamilton said the team had tried two different avenues in practice, and the one he went down was dreadful so they collated the data and made some drastic changes. The outcome was reassuring.

“To be back up there and experience the energy from the crowd was very reminiscent of that first year here,” he mused after the race. “I’m so, so happy.”

Asked how his back was feeling after the scare of Azerbaijan and a week of treatment, the 37-year-old replied: “It's good. I'm back to being young.”

It was Verstappen's his sixth win of the season and Red Bull's sixth in succession.

“It was really exciting at the end. I was giving it everything I had and, of course, Carlos was doing the same,” Verstappen said.

“I could see he was pushing and charging, but when you're on the DRS (drag reduction system) it's a lot easier to charge. The last few laps were a lot of fun.” — Reuters