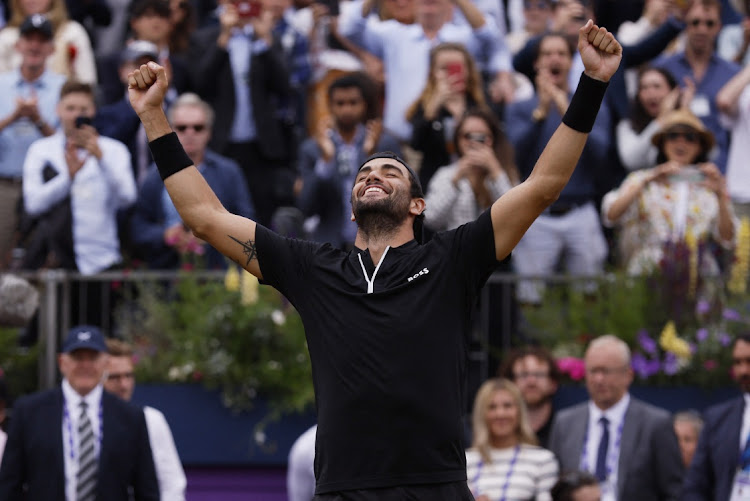 Italian Matteo Berrettini retained his title at the Queen's Club Championships with a 7-5 6-4 defeat of Serbia's Filip Krajinovic on Sunday, as the world number 10 gave himself the perfect launch pad into Wimbledon.

Berrettini had too much firepower for unseeded Krajinovic, who has now lost all five of his Tour-level finals.

The Italian, who also claimed the title in Stuttgart this month, has now won 20 of his last 21 matches on grass, his only loss coming in last year's Wimbledon final to Novak Djokovic.

He was made to work hard by Krajinovic who broke back in the first set, only to get broken again at 5-5.

A Krajinovic double-fault proved costly at 2-3 in the second set as Berrettini secured the decisive break of serve and went on to secure his seventh career title with an ace.

Berrettini, who had surgery on his right hand in March, is the eighth player to win back-to-back titles at the event, all of the others being former world number ones including John McEnroe, Jimmy Connors, Boris Becker and Andy Murray.

He will now go into Wimbledon as one of the favourites.

“There are too many emotions,” Berrettini said. “To have this trophy twice, I used to just dream of playing in this tournament. It was a really good week for me, I came here with a lot of confidence. Today was the best match that I played.

“I've worked so hard for this. I know that Wimbledon is different but I know that I can do it, I did it once. I'm really looking forward to it, but I know every match will be tough.”

A superb angled volley gave Berrettini the break he had threatened in the fifth game of the opening set.

But Krajinovic, who before this week had never won a match on grass, replied in the next game with a punchy volley to get back on level terms.

The Serbian netted a backhand to drop serve at 5-5, however, and Berrettini then held to take the opener.

In the second set Berrettini showed the range of his game, mixing power with panache to pull ahead, and once he broke serve to love in the fifth game, there was no looking back.

• Tunisia's Ons Jabeur won the second grass court title of her career after reigning Olympic champion Belinda Bencic was forced to retire injured in the final of the Berlin Open on Sunday.

Top seed Jabeur took the opening set 6-3, while Bencic injured her ankle in the final game. The Swiss attempted to soldier on but was eventually forced to retire with Jabeur leading 2-1 in the second.

Even as the crowd gave both finalists a round of applause, the Tunisian was busy helping treat Bencic as she took her seat, bringing her an ice bucket for her ankle.

Jabeur dropped only one set during the tournament, in a warning to her rivals ahead of Wimbledon which gets under way on June 27.

She also won the WTA 1000 clay court Madrid Open last month, making her only the second woman to win multiple titles this year after world number one Iga Swiatek. Jabeur is projected to move up to third in the world rankings on Monday.

Swiatek skipped the Berlin Open due to a shoulder issue, saying she wanted to recover and rest ahead of Wimbledon.

Jabeur will next head to Eastbourne, where she is set to partner with 23-times major champion Serena Williams for the doubles event. Williams is making her return to the tour a year after her last match.

After rain washed out Saturday's semifinals both players had to play twice in a day with Haddad Maia beating former world number one Simona Halep 6-3 2-6 6-4 while Zhang edged out another Romanian, Sorana Cirstea, in a third set tiebreak.

Haddad Maia led 5-4 in the opening set in the final when her opponent was forced to retire. She becomes the first Brazilian to win the title in the event's 40-year history.

Having begun the year ranked at 83, the 26-year-old Haddad Maia will now likely be seeded at Wimbledon when it begins next Monday. Last week she won the Nottingham title. — Reuters