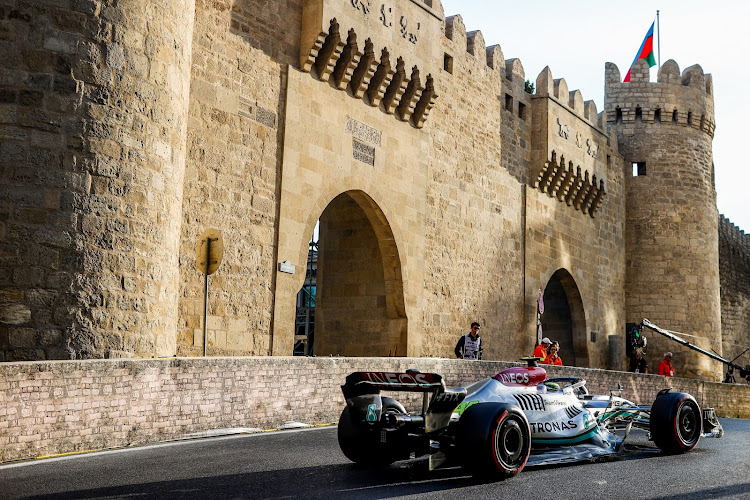 Lewis Hamilton of Mercedes and Great Britain during a practice session for the F1 Grand Prix of Azerbaijan at Baku City Circuit on June 10, 2022 in Baku
Image: Peter J Fox/Getty Images

Mercedes pushed Lewis Hamilton's car set-up too far in Azerbaijan last weekend and cannot cause him such pain again, the Formula One team's head of strategy said.

Britain's seven times world champion suffered severe back pain wrestling with his bouncing car in Baku and said it had been his most painful race.

Team boss Toto Wolff raised some concern about Hamilton being able to race in Canada this weekend but strategy boss James Vowles confirmed in a debrief that the driver would compete in Montreal.

“He is an elite athlete that will push the bounds of endurance of himself and the car and that's what Formula One drivers do, that's what makes them exceptional,” said Vowles.

“On this occasion though, we pushed the package and our drivers too far, we are putting them into significant discomfort and we simply can't do that again.

“We have a responsibility now to make sure that this doesn't carry on,” he added, pointing out other drivers were also suffering.

Hamilton finished fourth in Baku, with Russell third after both Ferrari drivers retired.

Formula One introduced a major rule revamp this season and the changes have caused cars to 'porpoise' — leaping up and down on the straights as the aerodynamic ground effect is suddenly gained and lost.

Vowles explained that there was a difference between porpoising, bouncing and bottoming.

“I’m confident we’ve made a step forward in terms of porpoising but we very clearly have bouncing and to the outside it looks almost identical, but there is a subtle difference between the two,” he declared.

Vowles said progress in resolving the porpoising at the Spanish Grand Prix had allowed the team to drop the ride height and run the car lower to the ground — which had revealed another problem.

The car was now “hitting the deck” quite hard with the bottoming creating the bouncing evident in Baku.

Vowles said Montreal was not going to be substantially different.

“I think we will still have a package that isn't at the front on merit,” he said. “Red Bull and Ferrari will still be the benchmark that we have to compare ourselves to.

“I think, though, that the large gap that you saw in qualifying in Baku perhaps won't be that big in Montreal.”

Meanwhile, Melbourne will host the Australian Grand Prix until 2035 in a new deal that will also see Formula Two and Formula Three added to the schedule for the first time next year, Formula One and local organisers announced on Thursday.

The current contract for the race at Albert Park was due to expire in 2025 and Sydney had expressed an interest in taking it on.

Melbourne joined the calendar in 1996, taking the place of Adelaide, and Formula One will have been there nearly 40 years by the time the latest deal ends.

More than 419,000 fans attended this year's race in April, the largest crowd ever for a weekend sporting event in Australia.

The race, which was not held in 2020 and 2021 due to the Covid-19 pandemic, has been a season-opener but was third on this year's calendar.

It is not expected to return to the prime slot taken by Bahrain, though Australian Grand Prix Corporation boss Andrew Westacott told Reuters in April that he wanted the race to be held early in the season.

Formula One CEO Stefano Domenicali said the race had always been a favourite for the fans, drivers and teams.

The paddock and pit lane facilities will be upgraded as part of the deal. — Reuters