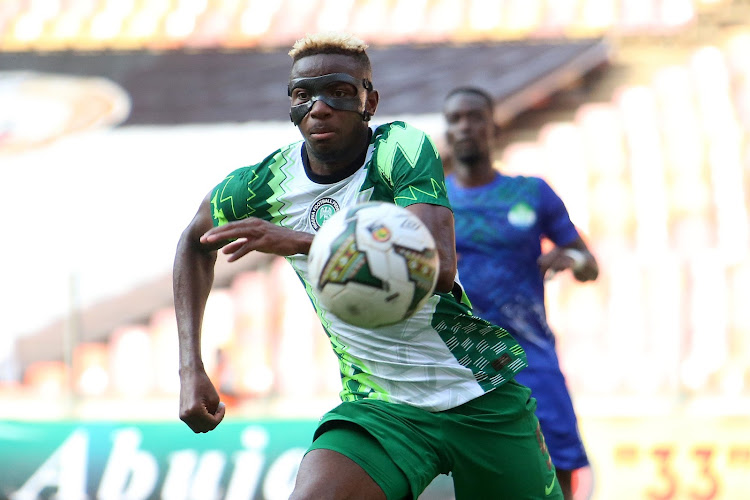 Victor Osimhen scored four goals as Nigeria completed a record 10-0 thrashing of Sao Tome and Principe in their 2023 Africa Cup of Nations Group A qualifier in neutral Agadir on Monday, while World Cup-bound Morocco laboured to a 2-0 win over Liberia.

Nigeria, who surprisingly missed out on a place at this year's World Cup in Qatar, completed their biggest international victory as Terem Moffi (two), Moses Simon, Peter Etebo, Ademola Lookman and Emmanuel Dennis also got on the scoresheet.

The victory means Nigeria have a maximum haul of six points from their opening two games as they seek to reach the continental finals in Ivory Coast next June.

That is two points ahead of Guinea-Bissau, who allowed Sierra Leone to rally from two goals down to secure a 2-2 draw in a game played in Conakry.

Two goals from Jorginho put Guinea-Bissau on their way to what looked like a comfortable three points.

But when Guinea's left-back Sana Gomes received a red card after 56 minutes the momentum turned in the favour of the hosts as Augustus Kargbo and Musa Kamara pulled the Leone Stars level.

Morocco were poor in the opening half of their Group K victory over Liberia, which was played in Casablanca despite it being a 'home' fixture for the west African side.

Like Sao Tome and Sierra Leone, Liberia have been barred from playing at home by the Confederation of African Football due to their stadiums not being up to the required standard.

Morocco therefore gleefully agreed to pay the costs of staging the fixture, but made heavy weather of their win.

After a goalless opening period with few chances they eventually took the lead via a penalty from Faycal Fajr and doubled their advantage two minutes later as Youssef En Nesyri scored his second goal in as many games.

Morocco lead the three-team pool with six points, while Liberia and South Africa meet in potentially decisive home and away fixtures in September. — Reuters