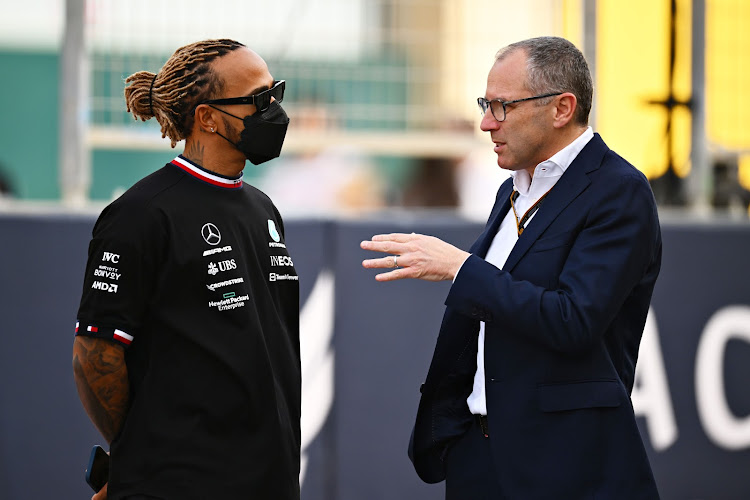 Lewis Hamilton of Great Britain and Mercedes talks with Stefano Domenicali, CEO of the Formula One Group, before the F1 Grand Prix of Bahrain at Bahrain International Circuit on March 20, 2022
Image: Clive Mason/Getty Images

Formula One boss Stefano Domenicali arrived in SA on Monday for talks that could see the country's Kyalami circuit return to the grand prix calendar next year for the first time since 1993.

A Formula One spokesperson on Monday confirmed Domenicali flew to SA after Sunday's Azerbaijan Grand Prix in Baku.

The former Ferrari team boss, who took over at the helm of Formula One last year, will meet representatives of the circuit north of Johannesburg with the sport keen to do a deal.

Africa is the only continent other than Antarctica without a Formula One race and Domenicali, who represents commercial rights holders Liberty Media, has spoken of his desire to rectify that.

“It is the only continent we're not in, it's an unbelievable demographic in population and one that we're very keen to bring more into the Formula One world,” she said. “So that's very much in our sights.”

SA was a regular round of the championship until 1985, when some teams and sponsors boycotted the race due to the country's apartheid system of racial segregation.

The sport returned to Kyalami in 1992 and 1993 after apartheid had ended and Nelson Mandela, later to become the country's first Black head of state, was released from prison.

Mercedes' seven times world champion Lewis Hamilton, the sport's only Black driver, has also pushed for the return of an African race with his father Anthony involved at one point in a Cape Town project.

Financing a race deal has always been the ultimate stumbling block, however.

Talk has intensified recently of Kyalami returning on what would be a record calendar of 24 races next season, if China's race in Shanghai is also reinstated after an absence due to Covid-19.

Formula One has already announced a new race in Las Vegas for 2023, joining US rounds in Miami and Austin, while Qatar starts a new 10-year cycle after dropping off this year's calendar due to the Soccer World Cup.

Some European races, notably France's round at Le Castellet, could miss out. A provisional calendar could be published by the August break. — Reuters