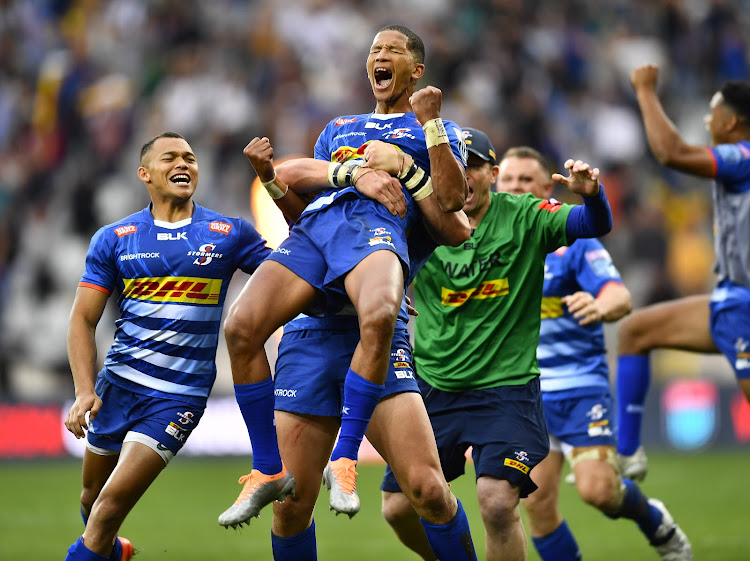 Manie Libbok of the Stormers celebrate after he scored a conversion that won the URC semifinal match against Ulster at DHL Stadium on June 11, 2022 in Cape Town, South Africa.
Image: Ashley Vlotman/Gallo Images

This match at a throbbing Cape Town Stadium came to a pulsating climax as the Stormers made a late entry on the scoreboard, if not write a new chapter in their history.

The crowd here went into raptures as an unmarked Warrick Gelant went over unmarked to tie up the scores before Manie Libbok, who was booed a little earlier and who found the fullback with a long-range pass, raised the flags with a nerveless conversion.

It sent the Stormers into the final of the United Rugby Championship (URC) and a date with the old foe the Bulls here next weekend.

The Stormers prevailed 17-15 over Ulster but not after having to dig deeper than they ever did in the URC or Super Rugby for that matter.

For much of the match the Stormers lacked big match temperament and composure and looked destined to again fall short in the knock-out stages.

The red card with which replacement lock Adre Smith was ordered off the field in the second half looked to be a terminal blow but the Stormers, through manic and mayhem found a way back to book their place in the final.

They had to do it the hard way.

Ulster were every bit the redoubtable side many expected them to be.

Stormers fans would have worn a collective frown at the arrival of the Ulster team bus much the way locals squinted at the horizon when the Dromedaris came into view.

The Stormers, a team that had to endure such a troubled recent existence, were within touching distance of hosting the URC final, against the Bulls nogal, at their first attempt.

The problem they faced however was a team that has come to understand the wider meaning of 'troubles'.

Ulstermen, and women, are accustomed to pitch battles and while the Stormers cut a swathe through the Ulster defence like a well-fortified Land Rover earlier in that game, they soon found themselves barricaded near their try line.

The Stormers at times mauled with menace but on the balance probably did not impact the scoreboard commensurate to the number of metres they gained through the human caterpillar.

By contrast Ulster made line breaks that gave them favourable field position. Their handling was slick with short, incisive passes the order of the day.

Ulster initially struggled to get a foothold in the game and it was only partly due to the fact that they kept losing their footing.

Ulster however are well organised, they are proficient at the ruck, possess pluck and a testing kicking game, mostly masterfully administered by scrumhalf John Cooney.

The Stormers did not make the gains in that area as they had earlier in the campaign, largely due to flyhalf Libbok going walkabout. Despite some hugely impressive displays in the URC this season, his performance against Ulster lacked conviction but, perhaps more importantly when measured within a Springbok context, authority.

That was until the last move and kick of the game.

Also within a Springbok context much attention was focused on the two No8s on display.

Evan Roos again went on his swashbuckling ways from the back of the scrum.

Opposite number Duane Vermeulen earlier this week opined how different they were as No8s.

While Roos spreads himself thin, Vermeulen lays it on thick in his narrower sphere of influence.

He is the freight train on a well-worn long-haul track, while Roos takes in all stations on his commuter run.

He hounds the ball carrier, exacts a steal but he is equally likely to pop up in a wide channel in attack or, as was the case here, thwart a try with last gasp intervention.

He then left the field bloodied but returned a dozen or so minutes later.

The Stormers scored an early maul try, while their second was a training ground routine.

The impeccable Hacjivah Dayimani rose high at the front of the line-out before Roos peeled around from the back, delayed his pass to Herschel Jantjies who drew his nearest marker before putting Roos in the clear.

Nothing however could prepare those present for the denouement that was to come.