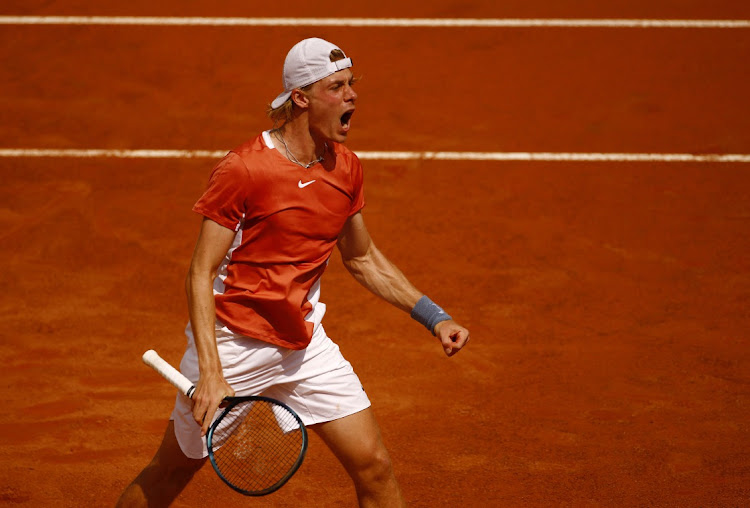 Canada's Denis Shapovalov reacts during his first round match against Italy's Lorenzo Sonego at the Italian Open in Rome on May 9, 2022
Image: GUGLIELMO MANGIAPANE / REUTERS

Denis Shapovalov called for tennis officials to take a stronger stand against disruptive fans after he was heckled during his three-set win over local hope Lorenzo Sonego at the Italian Open.

Shapovalov lost his cool, was handed a point penalty and was booed by the fans but he overcame all those distractions to beat Italy's Sonego 7-6(5) 3-6 6-3 in his opening match in Rome.

The Canadian was given a point penalty after he climbed over the net to point out to the chair umpire the mark on his rival's side of the court, which is prohibited by the ATP rules.

After Shapovalov complained about the punishment to the supervisor while being jeered by the fans, he screamed an expletive at the crowd as he believed he was being taunted by one spectator.

“He was just telling me to get off the court, get out of there, waving me off the court. Trying to obviously get under my skin or whatnot,” the Canadian told a news conference.

“I think the umpire just needs to keep an eye on it if a player mentions something.

“The reason (the heckler) didn't get kicked out was because (the umpire) told me he didn't see what happened. That's very understandable. I feel like he kept an eye on him after that. It didn't bother me after that.”

The 23-year-old suggested that tennis should follow the lead of other sports where disruptive fans are evicted from the stands.

“I think in the NBA there's a lot of hecklers and stuff like that. They're pretty strict, the security and everything, that (the fans) don't cross the line. If they do, they're kicked out right away.”

The world number 16, however, acknowledged his own behaviour was not acceptable.

“Obviously I think it's a heat-of-the-moment kind of thing. I just need to improve with handling myself about that,” Shapovalov said.

“But in terms of going forward, I've played in Rome a lot of times. The fans love me here and I love the fans ... Even after the match, there were a lot of people standing, waiting for pictures, stuff like that.

“I do really appreciate the sport and the love I get here. I'm super excited to play another match — not against an Italian,” he joked.

Three-times Grand Slam champion Stanislas Wawrinka won his first match in 15 months as he moved into the second round while Dominic Thiem fell in the first round yet again to remain winless on the Tour this year.

Wawrinka, who did not play for an entire year after undergoing two surgeries for a foot injury, was playing 14th seeded American Reilly Opelka and lost the first set before fighting back to win 3-6 7-5 6-2.

It was the Wawrinka's first victory since last year's Australian Open but the 37-year-old, a French Open champion in 2015, said he still has work to do in the gym and on the court to get back to a competitive level.

“Physically I was feeling great. For sure when you don't win a match in more than a year, you start to think always about it more than you should and not focus on the right things,” Wawrinka told reporters.

“In general I think it was a great match, great battle. I stayed positive, I started to feel much better with my tennis by the end of the second set and the third set. I'm really happy with this victory.”

Thiem, who is also coming back from a wrist injury which prevented him from defending his US Open crown last year, showed some encouraging signs but made 22 unforced errors in a 6-4 7-6(5) defeat by Italian Fabio Fognini. — Reuters