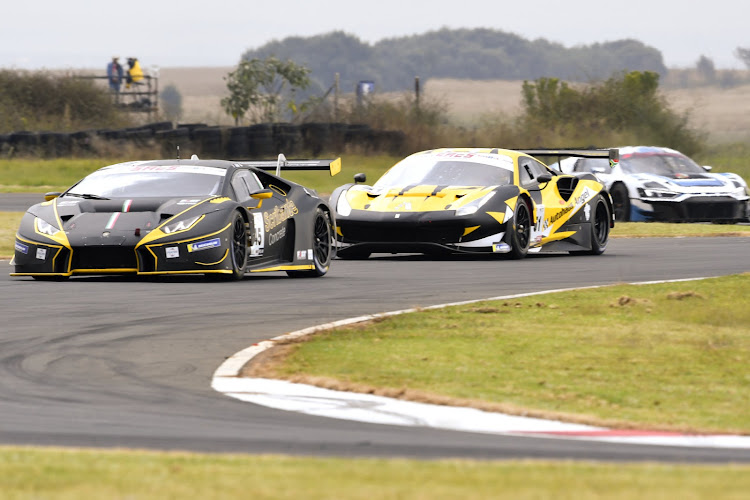 The upcountry crews are set to unleash their machinery in a bid to overturn the status quo at the Aldo Scribante Racetrack in Gqeberha, which hosts two one-hour races as rounds three and four of the 12-round championship this weekend.

The SA GT National Championship has transformed into something of a coastal vs inland teams battle after the opening two rounds at Red Star in April where the podiums were dominated by the seaside teams.

Nelson Mandela Bay race fans have no fewer than five home-grown competitors to cheer on, with three Scribantes, Michael Stephen and Daniel Rowe on the entry list.

Heading the title race is Capetonian Dayne Angel in his Autohaus Angel Ferrari 488 GT3 after a win and second place at the opening skirmish, leaving the youngster two points ahead at this early stage of the season.

The sibling rivalry sees Silvio three points ahead of Aldo and with equal knowledge of the 2.48km racetrack, this battle is too close to call.

Celso won both EP Saloon Car races in April, so cannot be discounted from the mix, especially paired with the hard-charging Rowe in the cockpit.

Michael Stephen is one of SA’s best-known racing drivers and possibly knows his way about the track better than anyone racing today.

He is sharing the Ultimate Outlaws McLaren MP4-12C with Izak Spies, the chair of the Southern African Endurance Series.

Spies missed the opening rounds as he awaited spares which were held up in customs and is raring to bag maximum points to kickstart his season.

The most exciting new entry is the rumbling 6.3-litre V8 engine Mercedes-AMG GT3 entered by Bigfoot Express chief executive Sun Moodley, who is well known for his drives in endurance racing.

Marius Jackson will be out in his new MegaFibre Audi GT3.

He gave the car a shakedown at a recent regional race with impressive results and will be watched with interest as he gains about 17% more power racing at the coast.

Another exciting entry is 18-year-old Kwanda Mokoena in a GT4-spec Into Africa/Amandla Coal Audi R8.

Mokoena is a protégé of the Africa Race Together foundation established by SAES shareholder Xolile Letlaka earlier in 2022.

The foundation aims to promote diverse talent in motorsport, and Mokoena is a perfect example of the foundation at work, having honed his racing abilities in the VW Polo Cup series.

Rounding out the SAGT entry is Marcel Angel in his normally aspirated Autohaus Angel Ferrari 458 GT3.

Saturday’s first one-hour race starts at 9.40am, with round four starting at 1.10pm.

SAGT is powered by Fast Racing Fuels and Michelin Tyres exclusively keeping the cars glued to the track.

The races will be live-streamed courtesy of Toys-R-Us SA.