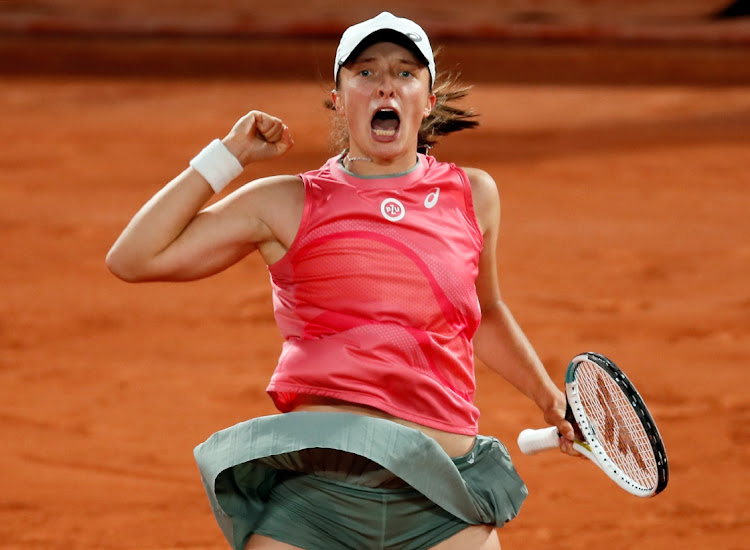 Iga Swiatek said she feels like a different player from a year ago and will go into her Italian Open title defence having cemented herself at the top of the women's game after a blistering start to the season.

The 20-year-old, who went from being an unknown teenager to acquiring celebrity status after capturing a maiden Grand Slam title at the 2020 French Open, triumphed in Rome last year by hammering Karolina Pliskova 6-0 6-0 in the final.

Replacing Ash Barty at the top of the world rankings after the Australian's shock retirement in March, Swiatek has adjusted well to the pressure of having a target on her back.

She skipped this year's Madrid Open because of a shoulder injury and arrives at the venue of her first WTA 1000 crown looking to add to titles in Doha, Indian Wells, Miami and Stuttgart and extend her 23-match winning run.

“I feel like I'm a different player right now. Last year ... I still was trying to find some kind of consistency in the wins I had and also confirmation that Roland Garros wasn't just like a (one-off) tournament,” Swiatek told reporters.

“I feel like I found that and I can move forward and focus on my next goals. For sure, the tournaments I played this year have shown me that I can play better tennis on hard courts.

“Right now the transition that I have to do to clay, it's different because usually it was like, 'whoa, clay, finally I can play well'. Right now ... I feel like my level was high anyway. It didn't, like, strike me this year.”

Swiatek said the break after Stuttgart helped her stay fresh.

“I had five or six days off without the racquet, which was nice,” said Swiatek, who faces either Shelby Rogers or Alison Riske.

“It's pretty good to have opportunity to do something like that in between tournaments, in the middle of the season.

“I feel I'm more fresh ... mentally and physically I had time to rest.”

The 18-time Grand Slam champion revealed she had been diagnosed with the disease in January.

“I'm a little out of it (meds) but nonetheless, thankful and relieved I finished my six chemo treatments,” she wrote on Twitter alongside a video of her with the healthcare workers who treated her and ringing a wind chime to mark the occasion.

“Love you, thank you so much ... We hope we don't see you again,” Evert told the workers with a laugh as she prepared to exit the healthcare facility.

Evert's younger sister, former pro tennis player Jeanne Evert Dubin, died after a battle with ovarian cancer in 2020 at the age of 62.

Dubin's cancer had spread before it was detected.

Evert, 67, has said her doctor told her that after the treatments were complete, there was a better than a 90% chance the cancer would never return because it was caught so early. — Reuters