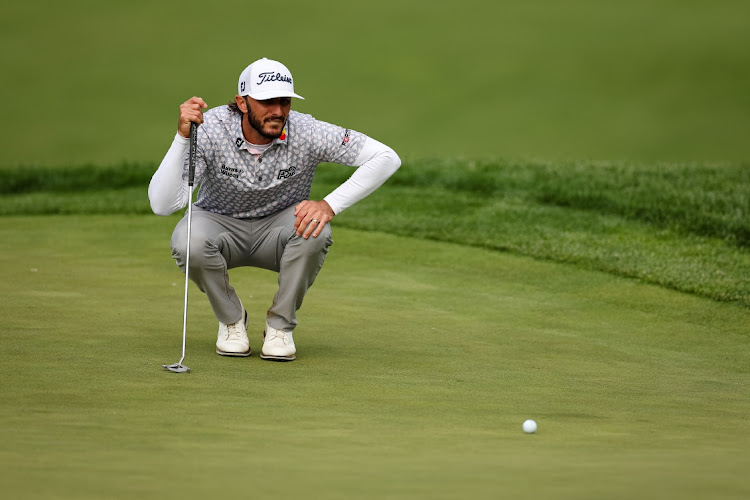 Max Homa lines up his tee on the 18th green during the final round of the Wells Fargo Championship in Potomac, Maryland on May 8, 2022
Image: Scott Taetsch-USA TODAY Sports

Max Homa shot a two-under-par 68 in the final round of the Wells Fargo Championship to outduel Keegan Bradley and win his fourth career PGA Tour title Sunday at Potomac, Maryland.

Homa started the day two shots off the pace of Bradley, the 54-hole leader at eight under.

Playing in the final pairing of the afternoon, they traded the lead back and forth before Homa drew away to finalise an eight-under 272.

Bradley posted a two-over 72 to drop into a tie for second at six-under with Cameron Young and England's Matt Fitzpatrick.

After Homa earned his maiden PGA Tour title at the 2019 Wells Fargo, at its usual home of Quail Hollow in Charlotte, North Carolina, he doubled up at the temporary site of TPC Potomac at Avenel Farm.

“This week felt very one shot at a time. With the weather, how difficult the golf course was, it just felt like, ‘Just play golf,'” Homa said.

Homa took control early when he birdied the opening hole and Bradley ran into disaster with a double-bogey at the par-five second. But after another bogey at No 4, Bradley charged back to eight under with birdie threes at numbers five, seven and eight, a stroke better than Homa at the time.

But Bradley struggled at the par-four 11th, when he missed right of the fairway off the tee and landed his second shot in a creek. It turned into his second double-bogey of the round.

“It was weird,” said Bradley, the 2011 PGA Championship winner.

“I didn't play my best golf today. It was choppy and then I had a couple good stretches but I had a chance there at the end, so I'm proud of that aspect of it. But I'm pretty bummed, I felt pretty good about this one.”

The mishap gave Homa a three-stroke cushion, but Homa's bogey five at No 13 and Bradley's birdie at the following hole narrowed that margin to one. Bradley couldn't capitalise, barely missing a long par putt at No 15 before Homa rolled in a 13-foot birdie putt.

Bradley made one final push by hitting his second shot at the par-four 16th inside nine feet and making birdie. Homa made a five-foot bogey save to drop back to eight under, but he saved par on the last two holes while Bradley could not pull out one more birdie.

“He hits it so well and he holed some really good putts. I'm just trying to play my game and kind of see what happened. He made an unbelievable birdie on 16 while I was trying not to make double.”

Young's four-under 66 featured six birdies and two bogeys and was only outdone by 48-year-old Stewart Cink's 65 for the round of the day. Fitzpatrick posted a bogey-free 67.

Rory McIlroy, the four-time major winner and 2021 Wells Fargo champion from Northern Ireland, placed fifth at four under after a final-round 68.

“Some of those pin positions on the back nine were tricky and tough to get close to,” McIlroy said. “Yeah, I mean, overall it's been a good weekend, a decent week, something to build on going into the PGA (Championship).” — Field Level Media