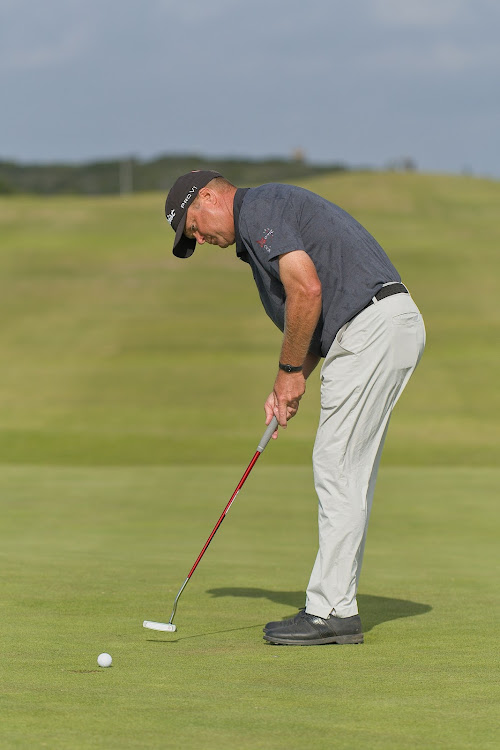 IN FORM: Doug McGuigan sinks a putt on the 17th green on his way to winning the Nelson Mandela Bay Classic golf tournament at Humewood in Gqeberha on Friday. McGuigan shot a final round 68 to beat overnight leader Keith Horne by one shot
Image: MICHAEL SHEEHAN

Doug McGuigan held off overnight leader Keith Horne in a titanic struggle to win the Nelson Mandela Bay Classic on an occasion which will forever be etched in his memory for reasons other than just golf.

A day after the 51-year-old Sunshine Senior Tour professional lost his mother, who was 80, he managed to come through for victory at Humewood in Gqeberha on Friday after a final-round 68 to finish on 13-under-par 203, one stroke clear of Horne.

They were followed home by a courageous effort from Mark McNulty, who overcame a disappointing first 10 holes littered with five bogeys to fire four birdies in the last eight holes for a five-under total of 211.

As he described the Humewood links course as one of his favourite destinations, McGuigan said victory in the second edition of the NMB Classic would always have a special place in his heart after the emotion of losing his mother.

“The guys love playing at Humewood and it’s a special place, but because of what’s happened to me recently it will always have an extra special meaning for me,” he said.

Horne led the first two rounds and was one ahead of McGuigan going into Friday’s tournament decider.

That lead disappeared with a two-shot swing on the first hole after Horne’s approach went over the back of the green and he made bogey, while McGuigan slotted the first of six birdies during his round of 68.

Thereafter it was a case of fluctuating fortunes as the pair duelled for the lead.

The tournament looked like heading for a playoff as they began the 17th on 13 under, but Horne’s drive ended up in relatively light rough on the right and his attempt to carry the burn in front of the green failed.

He had to drop out and could only make bogey, and suddenly the momentum was with McGuigan. He duly made his par and repeated that on the 18th to stay one ahead in a finish filled with emotion.

After taking the lead with a fine birdie putt on the par-three 14th, McGuigan said he had let himself down on the par-five 15th with the wind at his back.

“I was a bit disappointed on 15 as I had a nine iron in, but I put it in the bunker and then missed the birdie putt, letting Keith back in,” he said.

“But then I was a bit surprised that he went for the 17th green in two and I knew I had to two-putt to have a chance of winning the tournament.

“It’s an ugly thing to have to two-putt to win a tournament, because your touch is not quite the same, but I managed to do that.

“Still it was a great battle with Keith and I’m happy that I was able to pull it off in the end.”

Sunshine Senior Tour chief operations officer Neville Clarke said the second edition of the NMB Classic had been another resounding success and expressed his appreciation at the support received from the Nelson Mandela Bay municipality.

“The people in charge of organising events at the municipality have worked very hard to make this a success and we feel it’s a great boost for the region,” he said.

“The tournament went off very well with great conditions and great weather at the Humewood links course, and we look forward to returning next year.”

The final leading scores were: