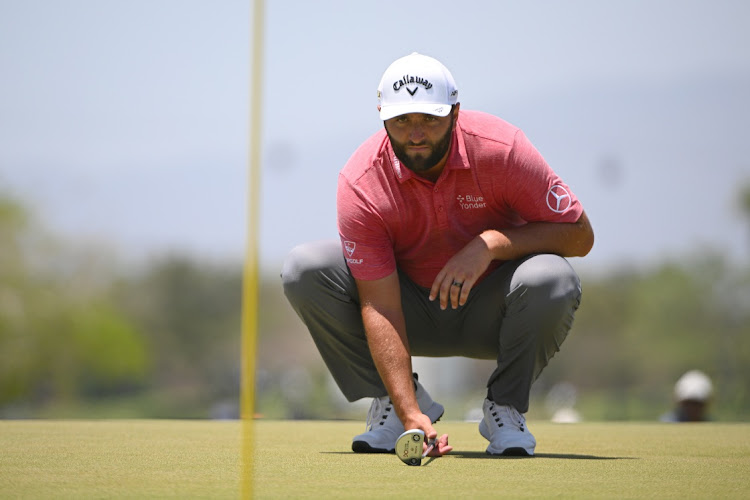 Jon Rahm of Spain lines up a putt on the 10th hole during the final round of the Mexico Open at Vidanta on May 1, 2022 in Puerto Vallarta, Jalisco
Image: Orlando Ramirez/Getty Images

Jon Rahm moved into the lead with a birdie at the 14th hole Sunday and saved pars the rest of the way to hang on and win the Mexico Open in Vallarta, Mexico.

The Spaniard posted a two-under-par 69 to finish at 17-under 267, one shot better than Brandon Wu, Tony Finau and Kurt Kitayama.

Wu and Finau shot matching rounds of eight-under 63 early in the day at Vidanta Vallarta to shoot up the leader board and put pressure on Rahm. The world No 2 had one bogey and three birdies on the day, the last coming on a left-to-right 11-foot putt at the par-5 14th.

Rahm held at least a share of the lead after all four rounds. He has now won at least one event in six straight seasons.

Though Rahm entered the week as the heavy favourite, his victory broke a nearly 11-month title drought dating to the US Open last June.

“I don't look at bets. I like to think every time I tee it up I can win,” Rahm said. “It was a pretty stressful weekend. But I got it done at the end.”

Rahm had a scare at the par-five 18th when his drive missed left and he had to punch out. Faced with 143 yards to the hole on his third shot, he landed it on the fringe and two-putted for par.

Kitayama played with Rahm and posted three birdies on a bogey-free front nine to make a push. But bogeys at Nos 10 and 14 held him back, and a birdie at the last hole gave him a three-under 68 to land in the tie for second.

Finau carded a blazing 31 on the back nine with a birdie-eagle-birdie stretch at Nos 13-15. His second shot at the par-five 14th was just short of the green, but his downhill lag putt hit the back of the cup and dropped.

Finau credited adjustments in his iron play he made before the Masters.

“I'm really happy with my round today, that's what I'll say,” Finau said.

“I haven't had a great season and just sometimes it's just how it goes. It's the game that we play. I really wanted to put together a nice week and I was able to do that this week and gave myself a chance to do something special right at the end.”

Like Finau, Wu avoided bogey on Sunday and carded one eagle with six birdies. His eagle came at the par-three sixth on a 14-foot putt. It was Wu's career-low round and best finish on the PGA Tour.

“Tried to keep it easy, that was kind of the game plan with me and my caddie,” Wu said.

“Hit a lot of greens, hit a lot of fairways. The conditions were kind of tough especially towards the middle and the end of the round, there's some tough holes with the wind, but yeah, I just tried to play my game and it was good.”