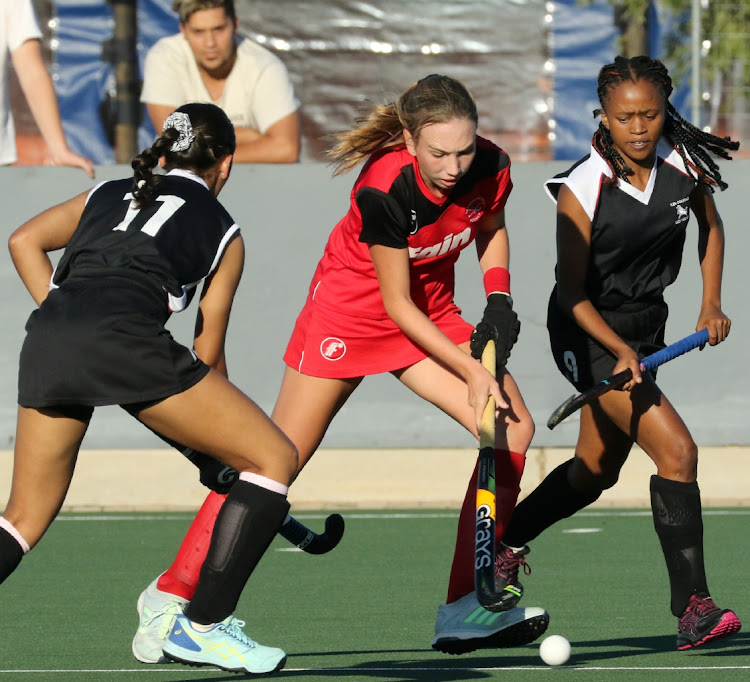 UNDER PRESSURE: EP’s Rachel Barry is hunted down by defenders Tasneem Booley, left,  and Rethabile Mosemaka  during the 3-0 defeat to KZN Coastals  at the KC March AstroTurf in Gelvandale on Thursday
Image: FREDLIN ADRIAAN

Eastern Province women suffered a second defeat in three matches when they went down 3-0 to KwaZulu-Natal Coastals in their final group game at the women’s interprovincial tournament at the KC March AstroTurf in Gelvandale on Thursday.

The KwaZulu-Natal  outfit put the home side to the sword, netting a goal in the first quarter before slotting home two more in quarters three and four to seal EP’s fate and book their spot in the semifinals.

The home side tried their best to outwit the visitors, however, a lack of ball control and a cutting edge in crucial moments proved their undoing, as numerous unforced errors left the door open, with KZN taking full advantage.

“Coming into this match, we knew we would have to beat them by a certain number of goals to get to the semis, so I think the nerves took over a bit in this game,” captain Megan Snyman said after the match.

“We were a bit rattled in the beginning and slowly started to find our form, but at the end of the day, they were the better side.”

Snyman felt the team worked  hard and gave their all on the Astro, but things just did not go their way.

“Being the third day, perhaps the fatigue started to show a bit, our connections didn’t work as well as we thought they would, so hopefully we can take tomorrow as it comes and work a little bit harder in the next match.

“Looking ahead to tomorrow, we need to be positive, learn from our mistakes today [Thursday], put this loss behind us, and work forward, whoever we come up against, we just need to work a bit harder to get the outcome we want,” Snyman said.

She said that despite the disappointment among her players at not getting the win,  they would still give their all in their next match.

The loss means the EP women end in the third spot in Pool B, which puts them out of contention for a semifinal place and they will now go into the playoffs to decide positions five to eight in the tournament.

Earlier, the Eastern Province men booked their semifinal spot after a pulsating clash against Southern Gauteng Witsies which ended 1-1 at full time.

The match went to a penalty shootout and resulted in EP overcoming a spirited Witsies 3-0 to advance to the final four where they will face off against Northern Gauteng Blues in the first semifinal match at Grey High School on Friday morning.