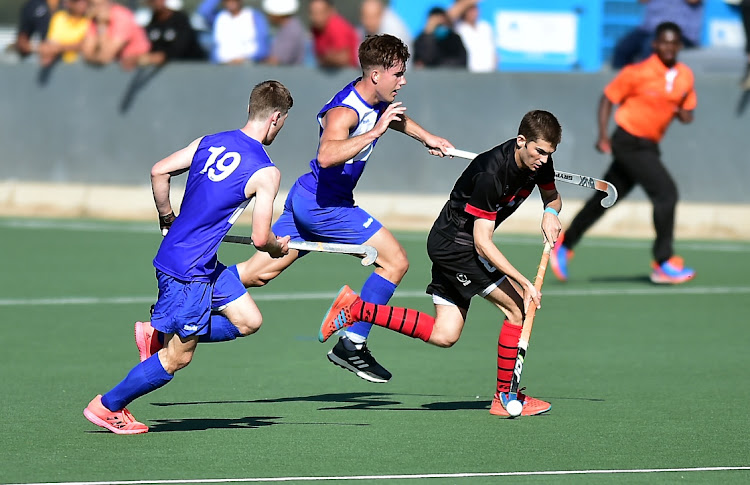 ON OFFENSIVE: EP No 8 Craig Saunders breaks away with WP players in hot pursuit during a Pool B clash at the KC March AstroTurf on Wednesday
Image: EUGENE COETZEE

Eastern Province hockey men’s captain Kamva Dyakala said they would not dwell too much on past results after suffering a 3-0 defeat to Western Province in the under-21 interprovincial at the KC March AstroTurf in Gelvandale on Wednesday.

Dyakala’s men were outclassed by a strong WP outfit, who scored either side of the halftime break before a third goal seven minutes from time ensured they ended the round-robin phase at the summit of Pool B while the hosts finished second.

The EP captain said after the match that while his charges created some good opportunities to get on the front foot, they lacked the cutting edge to finish off their opponents.

“Conceding so close to the end of the half did affect us, but we weren’t too worried about the result, rather the performance, and we just didn’t put in the performance today.

“I think we should have been way more clinical,  we had lots of opportunities to get inside, but I feel like we defended quite well in the opening half,” he said.

Dyakala felt they were still in with a chance of getting something from the game being just one goal down, but admitted that conceding a second goal left them a tad deflated.

“We felt we could still challenge to get something from the match, but when you concede a [second] goal at such a critical time, it is always difficult to bring the boys up from there.

“Tomorrow [Thursday] is quarterfinals day, we have spoken about how important every match is from this point on and we will just prepare as best we can for tomorrow’s match,” he said.

Meanwhile, the EP women’s A side opened their account with a convincing 3-1 win over North West.

Having lost 3-0 in their opening clash against WP on Tuesday, they showed they were not to be underestimated as Isabelle Bisdee converted a penalty corner in the opening three minutes of the match.

They were awarded a second penalty corner five minutes before halftime, which was smartly converted by Chelsey Cooke to double the home side’s lead.

EP netted again in the final moments of the third quarter when Lily Sharp buried the ball in the back of the net after some neat build-up play before North West pulled a goal back right on the stroke of full time.