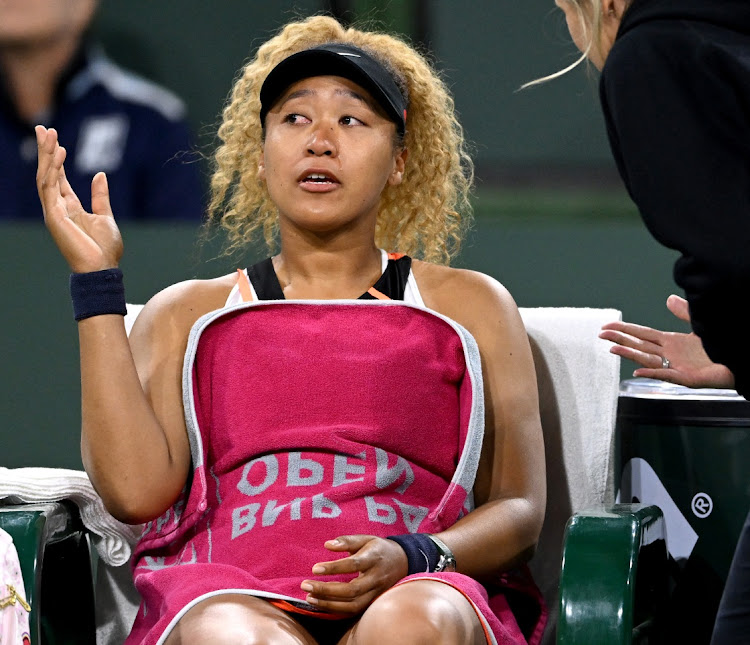 An emotional Naomi Osaka, of Japan, talks to the referee after a fan disrupted before the start of her second round loss to Veronika Kudermetova, of Russia, at the BNP Paribas open at the Indian Wells Tennis Garden in Indian Wells, California on March 12, 2022
Image: Jayne Kamin-Oncea-USA TODAY Sports

Naomi Osaka said she is filtering out any negativity in her preparation for the clay court season as she continues to heal from being heckled in a second round loss at Indian Wells last month.

The four-times Grand Slam champion was broken in the first game at the tournament in California when a fan shouted “Naomi, you suck” and Osaka could later be seen wiping away tears. However, the Japanese said her focus was on the positive ahead of the Madrid Open beginning this week.

“I'm not going to lie, it's not like everyday is being perfect,” Osaka told reporters when speaking about her struggles with mental health.

“I would say that filtering the negativity from a minority is something that I'm getting better doing. I'm doing mental exercises to focus on the positive,” Osaka added, explaining that she is staying away from Twitter because “it is way more negative than Instagram”.

She also said that the Indian Wells experience allowed her another opportunity to grow as she looks to recover her world number one ranking, having slipped to 36 since taking a break from tennis after her upset loss at last year's US Open.

“There are a lot of moments in my career that are extremely sad for me at that time but I can later come back, look at it and think that I really grew as a person after that,” Osaka said.

“Even though I really hated the experience, I'm glad it happened to me. Indian Wells was one of those moments. I wish it didn't happen but I'm glad it did.”

After losing in straight sets to current world number one Iga Swiatek in the Miami Open final earlier this month, Osaka went to Rafa Nadal's home in Mallorca to prepare for the clay court season and made a few tweaks to her game inspired by the 21-times Grand Slam winner.

“I stole one of the things that he does and I've been practising it recently so it will either go really good or really bad. There is no in-between,” Osaka joked.

Clay is not Osaka's strongest surface as she has never gone beyond the third round at the French Open. However, she said she was not setting any targets ahead of the Grand Slam at Roland Garros next month.

“I'm taking one tournament at a time,” Osaka said. “Of course, I want to win matches and reach the semis either here in Madrid or in Rome (Italian Open), hopefully win, but I'll set little goals first.”