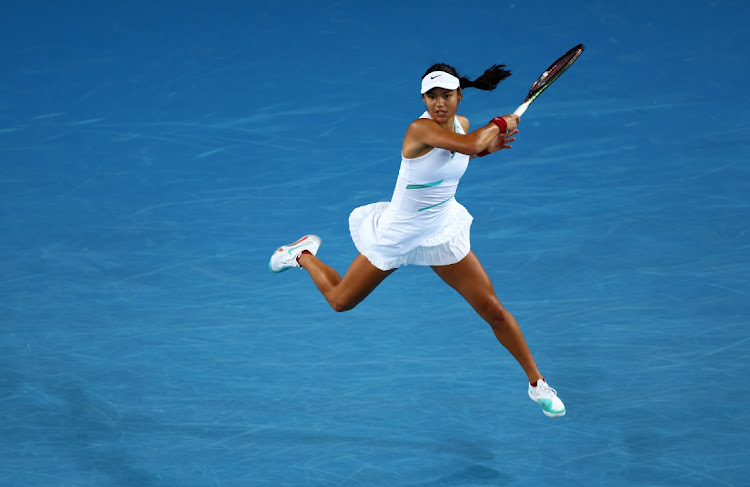 Emma Raducanu plays a forehand in her first round singles match against Sloane Stephens during day 2 of the Australian Open at Melbourne Park on January 18, 2022.
Image: Clive Brunskill/Getty Images

Raducanu, who rocketed to fame in September with a fairytale run to the US Open title as a qualifier without dropping a set in what was only her fourth senior tournament, raced through the opening set in 17 minutes, leaking only four points.

But former world number three and 2017 US Open champion Stephens finally found her rhythm and range to take charge of the second set from 2-2, reeling off four games as errors began creeping in to 17th seed Raducanu's game.

It looked ominous at that point for the 19-year-old Raducanu whose build-up to her Australian Open debut had hardly been ideal, having had Covid-19 and suffering a heavy defeat in her opening match in Sydney.

But she showed the same coolness under pressure that swept her to the title in New York, settling down and finding another gear to dominate the decider with some precision baseline hitting as Stephens unravelled again.

Stephens avoided another rout as she held serve at 0-5 but there were no more twists on a sparsely-populated Margaret Court as Raducanu closed out the win on serve despite a sixth double-fault on her first match point.

It was an encouraging start for Raducanu despite the second-set wobble and she will be heavily fancied to get past 99th ranked Danka Kovinic of Montenegro in the second round.

"It was a tough match-up for a first round, her athleticism is right up there, so I'm just happy to get through," Raducanu, who was under the eye of new coach Torben Beltz, said on court.

"In the first set I played some great tennis with very few errors. Of course there was going to be some adversity and I was happy to regroup in the third set.

"I don't think the score reflected the match really as I was really feeling it."

When Raducanu belted away a forehand winner on the opening point of the match and pocketed the first set without breaking sweat it seemed she had just carried on from where she left off when beating Leylah Fernandez at Flushing Meadows.

It had been a whirlwind existence since that momentous day for the youngster and the spotlight has been firmly on her as the Australian Open loomed.

A 6-0 6-1 defeat by Elena Rybakina in Sydney, her only competitive match ahead of the Open, was a reality check and when her level dropped alarmingly in the second set, albeit with Stephens upping her own game, the alarm bells were ringing.

With little experience of deciding sets in Grand Slams, the odds had switched towards Stephens whose world ranking of 67 does not do justice to her pedigree.

But it was Raducanu who showed the better game-management, cutting out the errors to seize the initiative early before romping home to take her winning streak in Grand Slams, including the US Open qualifying, to 11.