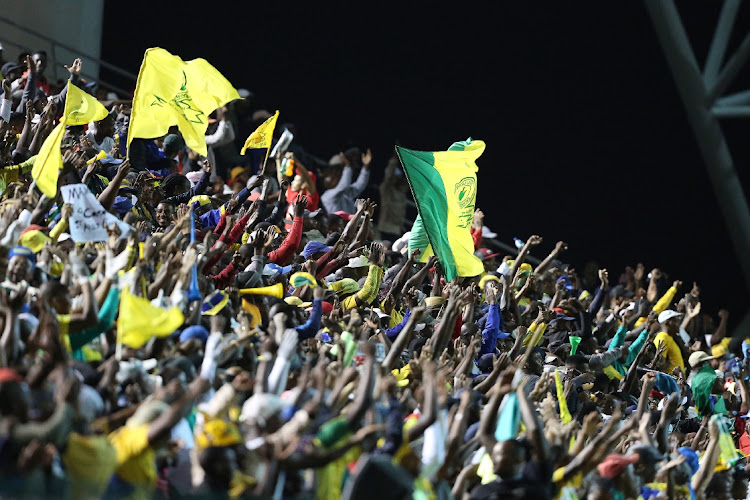 Mamelodi Sundowns supporters in a stadium before Covid-19. Sascoc will recommend to government that stadiums host matches at half their capacity.
Image: EJ Langner

The SA Sports Confederation and Olympic Committee (Sascoc) will recommend to government that stadiums host vaccinated fans at half their capacities from next month.

EFF leader Julius Malema at the weekend called on the Premier Soccer League to challenge regulations that have limited attendance at stadiums for professional sports to 2,000 as a precaution against Covid-19.

Sporting codes have argued that having 2,000 spectators inside stadiums does not make financial sense as it does not allow teams to cover the costs of hosting a crowd. Sascoc will present a case for venues to be allowed to host significantly increased numbers.

Malema’s comments received a groundswell of support from sport fans across the country and on Tuesday the health department said it was open to engaging relevant stakeholders on the matter.

“There is a task team in place at Sascoc that deals with issues related to the return of fans to stadiums,” Sascoc president Barry Hendricks told TimesLive on Wednesday.

“They are going to get together later this week for discussions on how we are going to reduce the current Covid-19 restrictions.

“From Sascoc's point of view, we are looking at having at least 50% of fans inside stadiums, but what is important is that those spectators must be vaccinated. That is our position.”

Hendricks said the committee is due to meet this week. He said he believes Sascoc's request would not be unreasonable because a similar stand has been adopted at the Africa Cup of Nations in Cameroon.

“The committee is meeting later this week but I am not in a position to give an indication of when they are going to meet with sport minister Nathi Mthethwa," he said.

“The way matters are unraveling nationally, we can safely look at February to get the necessary amendments to the Disaster Management Act in place by the department of cooperative governance and traditional affairs.

“We have consulted. If you look at what is happening at the Africa Cup of Nations you can see fans are allowed in stadiums and some venues are almost full.

“We want to move in that direction. It is a pity we couldn’t have fans in the ongoing Test series between SA and India. We would have loved to see fans there but let’s follow processes and see where we end up.”

Sporting events where limited numbers of fans have been allowed back to stadiums have included Bafana Bafana’s 2022 World Cup qualifiers against Ethiopia and Zimbabwe.

There were a limited number of spectators for the MTN8 final between Mamelodi Sundowns and Cape Town City in Durban and an ODI between the Proteas and Netherlands.

Professional sport was shut down by the onset of Covid-19 in March 2020, with government regulations allowing 2,000 vaccinated supporters back to stadiums as a first step towards allowing the return of crowds.

Football clubs have said they cannot cover the costs of allowing only 2,000 supporters in a stadium.

In the cricket Test series between SA and India, only limited suite tickets have been available, but not for the general public.

That was at the request of India regarding the bio-bubble provisions requested by the touring team.

Fans were allowed into United Rugby Championship matches before the Omicron variant and fourth wave hit SA in December.