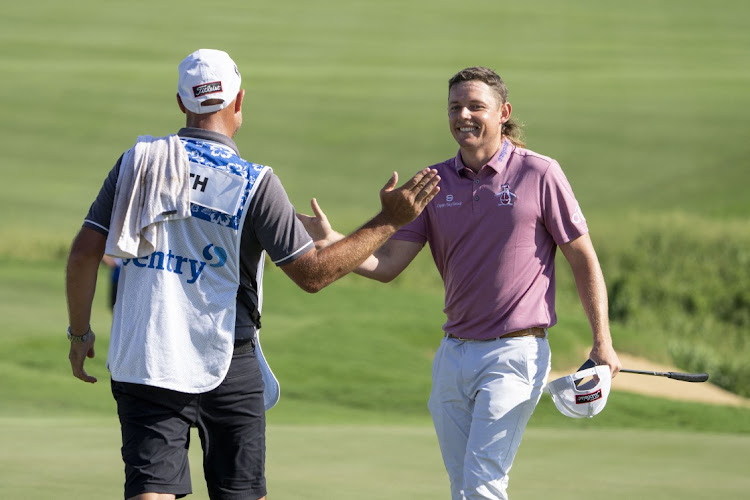 Despite notching an incredible PGA record low 34-under on a 72-hole par, the Tournament of Champions still wasn't decided until Cameron Smith's final hole Sunday.

But a birdie on 18 wrapped up Smith's one-stroke victory and a final-round 65 (eight-under) for the Australian in Kapalua, Hawaii.

Smith hit eight birdies on the day, including four over the final six holes, to keep his competition at bay.

The win was Smith's fourth on the Tour. His most recent victory before Sunday was at the Zurich Classic of New Orleans — coincidentally where he also earned his first championship — last spring.

World No 1 Jon Rahm of Spain and Australia's Matt Jones, who had to settle for second and third respectively, each bested Ernie Els' previous high-water mark of a 31-under, set at the 2003 TOC. Rahm finished 33-under, while Jones was 32-under.

Rahm, who finished with a seven-under-66 Sunday, birdied his final hole to keep the pressure on Smith, before Smith matched his round.

“I have every reason to be smiling,” Rahm said. “It's a bittersweet moment.”

Jones added a third impressive performance, firing a scorching 12-under 61 on Sunday, a round which featured two eagles and eight birdies. After scoring a nearly as good 62 on Saturday, that gave Jones a PGA record of his own, the lowest 36-hole score at 23-under.

Patrick Cantlay finished in fourth place at 26-under after his final-round six-under-67.

Three golfers finished tied for fifth at 25-under. Collin Morikawa shot a 62 on Sunday, Justin Thomas recorded a 65 and Daniel Berger had a 69.

Kevin Kisner fired a final-round 65 to forge an eight-place tie with South Korea's Sungjae Im (final-round 69) at 24-under.

Cam Davis (66) and Marc Leishman (68) rounded out the Top 10, finishing 23-under for the tournament. — Field Level Media