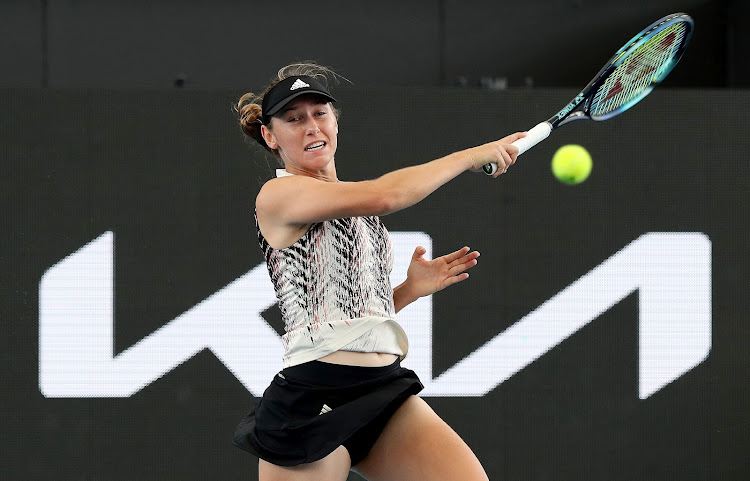 Kaja Juvan of Slovakia in action against Aryna Sabalenka of Belarus day four of the Adelaide International at Memorial Drive on January 5, 2022
Image: Sarah Reed/Getty Images

Second seed Aryna Sabalenka suffered a shock exit at the Adelaide International on Wednesday after a 7-6(6) 6-1 defeat to world number 100 Kaja Juvan of Slovenia in the second round.

World number two Sabalenka, a semi-finalist at last year's Wimbledon and US Open, struggled with her serve, racking up 18 double faults, and committed 49 unforced errors in the shock loss to the 21-year-old at the Australian Open warm-up event.

Juvan won a tight first set after trailing 2-0 and saved a set point at 6-5 in the tiebreak, before racing ahead 3-0 in the second to storm to victory in an hour and a half.

“I really enjoyed the first set. I love when matches get tight, when it's competitive and when it's a really tight fight,” Juvan said after sealing her place in the quarterfinals.

“I was feeling a little bit sorry at some points because I ... knew she's not doing the best with the serve and we all know how that feels at one point.

“I know she can do it better, but on the other hand, I was just saying to myself, 'Focus. Stay here until the end. It can turn at any point.' I was really just trying to stay there until the very end and really fight.”

World number one Ash Barty will face American Coco Gauff later on Wednesday while Greece's Maria Sakkari takes on Shelby Rogers in the second round.

• Lithuanian qualifier Ricardas Berankis overcame American Marcos Giron 7-5 6-4 in his Melbourne Summer Set opener on Wednesday and will provide the opposition for Rafa Nadal in his first ATP Tour match since August.

Berankis broke Giron three times to take a tight opening set and sealed victory over the world number 66 in just over 90 minutes.

Up next for the world number 104 at the Australian Open warm-up tournament will be Nadal, who is back in action after overcoming a niggling left foot injury that ended his 2021 season prematurely.

Nadal pulled out of Wimbledon, the Tokyo Olympics and the US Open before returning to action in an Abu Dhabi exhibition event late last year. His last match on the Tour was at the Citi Open on August 5 last year.

The 35-year-old, who tested positive for Covid-19 last month, is also competing in the doubles at the event, partnering Jaume Munar to victory in a match on Tuesday.

Also on Wednesday, Jordan Thompson battled from a set down to beat fellow Australian Christopher O'Connell 1-6 7-5 6-4.

Local favourite Stosur will call time on her singles career after the January 17-30 Australian Open, though she will continue to play doubles in 2022.

American Madison Keys fended off a late comeback attempt from Briton Harriet Dart to secure a 6-3 7-6(2) victory while Russian third seed Daria Kasatkina advanced after her compatriot Anna Kalinskaya retired while down 6-1 3-0. — Reuters