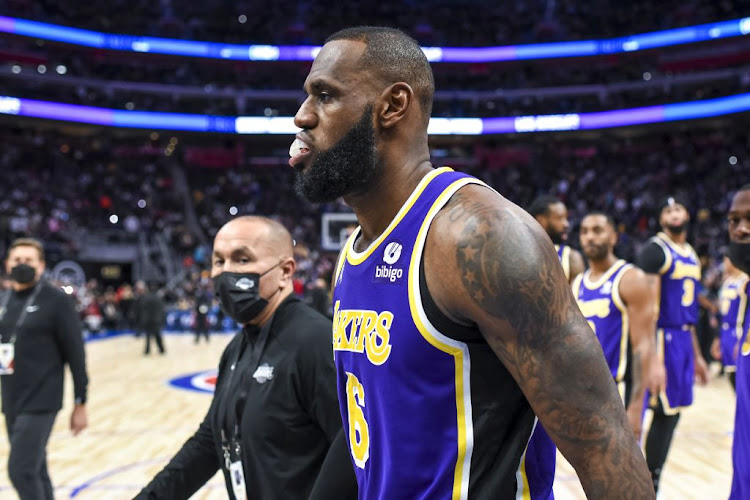 LeBron James of the Los Angeles Lakers is ejected from the game during the third quarter of the game against the Detroit Pistons at Little Caesars Arena on November 21 2021 in Michigan.
Image: Nic Antaya/Getty Images

Los Angeles Lakers star LeBron James was ejected from Sunday’s 121-116 victory over host Detroit after receiving a flagrant foul 2 for slamming his left fist into the face of Pistons forward Isaiah Stewart.

The strike left a big gash in Stewart's face with blood pouring out of it. It also enraged him as Stewart repeatedly tried to charge at James as his teammates and coaches unsuccessfully tried to calm him. The ejection of James came in his second contest after missing eight games with an abdominal strain. It is his second career ejection.

The fracas began with Detroit holding a 78-66 lead with 9:18 left in the third quarter. James connected with Stewart's face after a free throw. Stewart confronted James before other players intervened, but he refused to leave the court and kept breaking away and trying to get to James. Stewart was ejected for his actions.

The Lakers and Pistons had to be separated multiple times after this play between LeBron and Isaiah Stewart. pic.twitter.com/im0o7fXeoI

After the situation was reviewed and James was ejected, the officials had security guards escort him to the locker room in case Stewart was plotting another attempt to confront him. Lakers forward Anthony Davis said it was an unintentional act on the part of James.

"Stewart tried to get physical with LeBron and LeBron did the same thing," Davis said shortly after the game concluded.

"Everybody in the league knows LeBron's not a dirty guy. As soon as he did it, he looked back at him and said, 'Oh, my bad, I didn't try to do it.' I don't (know) what (Stewart) was trying to do. I've never seen a player try to do that since I've been playing. I know we've seen it before (back) in the day. That was uncalled for. You got a cut above your eye, accidentally. It wasn't on purpose. We weren't going to allow him to keep charging our brother like that."

James' other ejection came when he played for the Cleveland Cavaliers. He was tossed for arguing during a 108-97 victory over the Miami Heat on November 28 2017. James had 10 points and five assists in 21 minutes before Sunday's ejection. Stewart had four points in 19 minutes. Pistons coach Dwane Casey said Stewart received eight to nine stitches to repair the gash. He also said he shouldn't be disciplined by the league.

"He was upset," Casey said.

"He shouldn't be facing anything. Not getting off the court in time (is a small thing). I don't see any ramifications from the league on that."

The Lakers and Pistons play again next Sunday in Los Angeles.