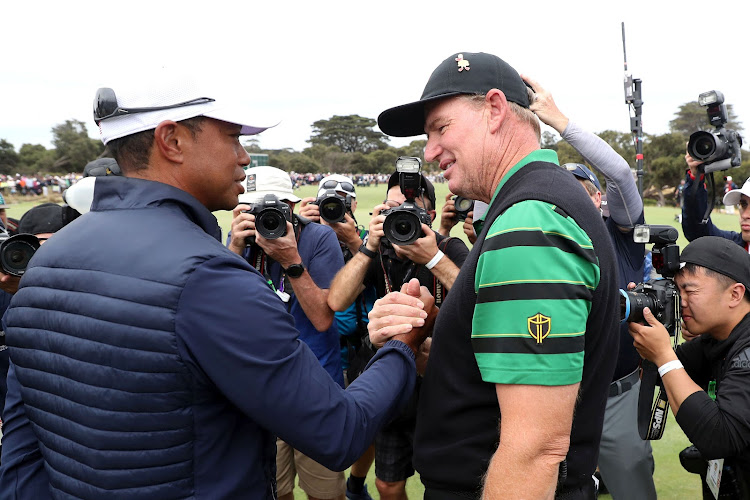 Count Davis Love III among those rooting for another Tiger Woods comeback — even if it means giving up the US captaincy at the 2022 Presidents Cup.

Love III was announced as the captain in January, but only after Woods declined to continue in the role after the US's 2019 victory so he could focus on making the team as a player.

That was a month before Woods suffered severe leg injuries in a car accident. He has not made an official public appearance since, with friend Justin Thomas offering last week that he only sees Woods returning to competition if he believes he can win.

Love III hopes to see Woods back on the course as a player, but wants him involved in the Presidents Cup in any way that works for the 15-time major champion.

“It would have been a great captaincy for Tiger to continue on,” Love III said Tuesday ahead of the RSM Classic. “At the time we were discussing it, he said, 'No, I'm playing really good, I'm gonna make the team, and I enjoyed Australia being playing captain, but I want to be a player on the team.'

“So his role is whatever his role wants to be. If Tiger calls me up and says, 'Hey, you're kicked out, I'm taking over,' that's Tiger's role.”

Woods did not travel to Whistling Straits for September's Ryder Cup, but several members of Team USA have said he had an important role from his Florida home — including staging a watch party.

“I would hope that he comes back and starts playing and can make that a goal, to be on the team,” Love III said. “He was a big part of our Ryder Cup. It took us a while to get him to the point where he would engage. Obviously he had a rough start to the year, but once we got him in the loop, he was a big help and a lot of fun for the Ryder Cup and for the team.

“Obviously, the guys were going to see him down there in south Florida all summer, but leading up to the Ryder Cup, obviously he had a watch party at his house. He can do whatever and I know he'll be a big part of it.

Love III also said he is now looking at Phil Mickelson as focused more on playing in the Presidents Cup rather than service as a vice-captain.

Mickelson is coming off a win at the Charles Schwab Cup Championship on the Champions Tour, closing out a year that also included winning the PGA Championship.

“He hasn't won as many as Hale Irwin, but win-per-start, he's doing awfully well like (Jim) Furyk. I would look for Phil as a player right now, yes, more than anything.”

The US staged a dramatic comeback to win the 2019 Presidents Cup with Woods playing a major role as a playing captain at Royal Melbourne in Australia. The event was then postponed from 2021 due to the Covid-19 pandemic.

SA's Trevor Immelman was named the captain of the International Team in April 2020.

Love is the ninth US captain. He has represented the Americans in the Presidents Cup on six occasions, including the inaugural event in 1994. — Field Level Media