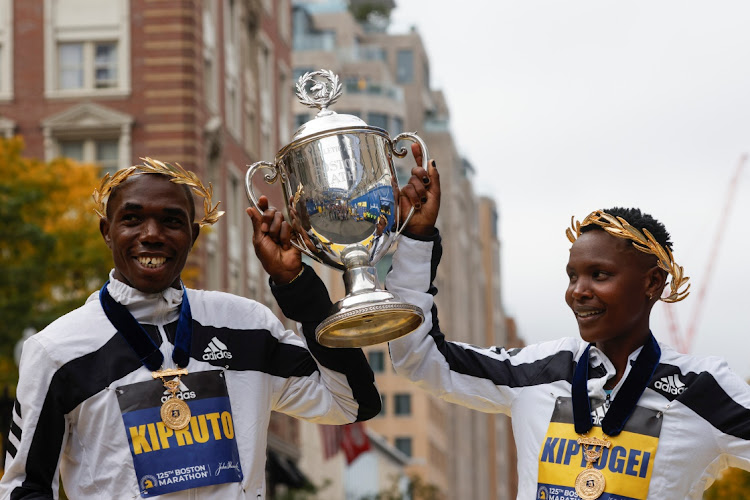 Benson Kipruto and Diana Kipyogei of Kenya won the men's and the women's division of the 125th Boston Marathon on October 11, 2021
Image: BRIAN SNYDER / REUTERS

Kenya's Benson Kipruto won the men's race and Diana Kipyogei led a Kenyan sweep of the women's podium at the Boston Marathon, each picking up their first-ever major title.

American CJ Albertson set an aggressive early pace to lead the men's field by two minutes and 13 seconds through the first half but saw his headstart disintegrate over hilly terrain after the 20-mile mark, as a tight pack overtook him.

Kipruto, who won the Prague Marathon in May, pulled away with less than 10 kilometres to go and had secured a commanding 41-second lead heading into the last mile, absorbing the cheers along Boylston Street as he broke the tape in two hours, nine minutes and 51 seconds.

In the women's race, a crowded pack stuck together through the first 25 kilometres before Kipyogei, who won the Istanbul Marathon in 2020, made her move, securing a 10-second lead over the rest of the field by the 30-kilometre mark.

Ethiopia’s Netsanet Gudeta quickly challenged her but Kipyogei proved too powerful, again pulling away to win the race in two hours, 24 minutes and 45 seconds.

Edna Kiplagat, who won in 2017, and Mary Ngugi finished second and third, respectively, to complete a podium sweep for Kenya.

Swiss athletes won the men's and women's wheelchair events, with Paralympic champion Marcel Hug picking up his fifth title in Boston in 1:18:11 despite missing a turn in the final moments of the race, an error he told officials may have cost him 20 seconds.

Manuela Schar picked up her third Boston Marathon win in 1:35:21.

Temperatures hovered around 60 degrees Fahrenheit (15.6°C) as the professional men's and women's groups took off from Hopkinton, Massachusetts, under humid conditions for the 125th running of the world's oldest annual marathon.

Organisers pushed the race back from its usual April date due to the Covid-19 pandemic and made other adjustments to the race, including capping participation to 20,000 entrants and requiring either a Covid-19 vaccine or proof of a negative test.

The change in date made for a tight autumn racing schedule, with the London Marathon pushed back from its usual April running to Oct. 3 and the Chicago Marathon moving forward as planned to Oct. 10.

The race was cancelled in 2020 due to the pandemic. - Reuters