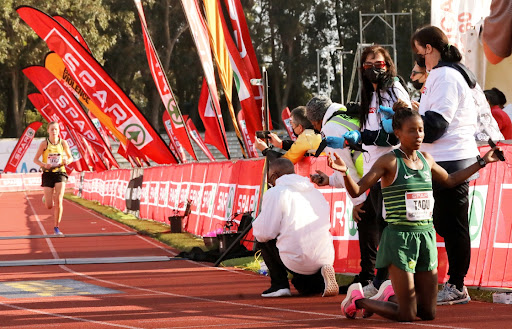 Tadu Nare (Nedbank) cruised to victory in the 10km Gqeberha SPAR Grand Prix at Nelson Mandela University on Saturday to make it six out of six and clinch the series.

But the story of the day was fellow 20-year-old Tayla Kavanagh (Murray & Roberts), who ran the fastest time by an SA runner on home soil this year, to come second in 32.51.

Kavanagh finished third in Maritzburg in August and fourth in Durban, but skipped the Cape Town, Tshwane and Johannesburg races.

Glenrose Xaba (Boxer) finished third in 32.59.  Xaba was second in Maritzburg and Tshwane and fourth in Joburg. She missed the Cape Town race because of injury.

The race was run in windy conditions, and Nare said this had affected her running.

“I found it very difficult in the wind,” she said.

“I would like to build a house for my mother,” she said.

Kavanagh and Xaba had a battle for second place, with Kavanagh pipping Xaba to the post.

“I am very happy because it was a personal best for me.

“I think it has helped that I didn’t run all the races and had time to recover between them,” Kavanagh said.

“I would like to run all the races next year, depending on the schedule.”

Asked about her future plans, she said her next race was the SA 10km championships in Durban later this month.

“I want to improve my 10km, and then move into half marathons and marathons,” said Kavanagh.

Xaba praised Kavanagh, saying she had just not been able to overtake her in the final stretch.

“She’s a very talented athlete and I think she will got far,” said Xaba.

Like Kavanagh, Xaba’s next big outing is the national championships in Durban.