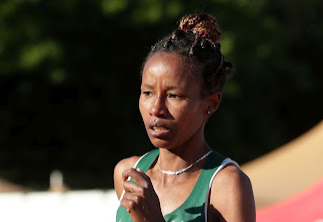 ON A ROLL: Ethiopian runner Tadu Nare (Nedbank) is the favourite to win the SPAR Grand Prix Gqeberha race to be run within the Nelson Mandela University precinct on Saturday
Image: REG CALDECOTT

All 20-year-old Ethiopian runner Tadu Nare (Nedbank) needs to do to win the 2021 SPAR Grand Prix title is to take part in the final race in the series in Gqeberha on Saturday.

With five wins in the six-race series under her belt, Nare has accumulated 125 points, and is 18 points ahead of her nearest rival.

But Nare indicated in Johannesburg on Sunday that she was hoping to do a very good time in the final race.

“I started slowly because I was saving myself for the last race,” Nare said.

“It is at sea level and I can run faster there.”

Asked if she planned to attempt to run the 10km in under 30 minutes, Nare was non-committal.

“I want to run a fast time and it all depends on the weather conditions,” she said.

Most of SA’s top road runners will be in action on Saturday.

The race will be run on the Nelson Mandela University campus.

There will be three laps of about 3.1km each, finishing at the Madibaz Stadium where they will run the final 300m on the track.

The organisers say the course is flat and expected to produce fast times.

The 2017 Grand Prix winner, Kesa Molotsane (Murray & Roberts), is second on the leader board.

She has come second twice, in Cape Town and Johannesburg, and will be looking to maintain her position on Saturday.

Glenrose Xaba (Boxer), who has come second three times, will be trying to improve on her fourth place in the Joburg race.

Xaba missed the Cape Town race and has been trying to regain lost ground on the Grand Prix leader board.

Irvette van Zyl (Nedbank) made a welcome return to the series in Tshwane, after missing the first three races because of a stress fracture sustained shortly before the women’s marathon at the Olympic Games in Tokyo.

She finished fourth in Tshwane and third in Johannesburg and the three-time winner of the Grand Prix should never be underestimated.

There is an interesting battle for first place in the veterans category.

Having finished second to Bosman in the previous four races, Grundling moved to the top of the category log with 21 points.

If Bosman wins on Saturday, and Grundling comes second, they will finish with 25 points each.

The race starts at 7am

Because of Covid restrictions, there will be no spectators, but fans can track runners on the SportSplitz app and live-stream the race on the SPAR Grand Prix Series Facebook Page from 6.30am. — BLD Communications