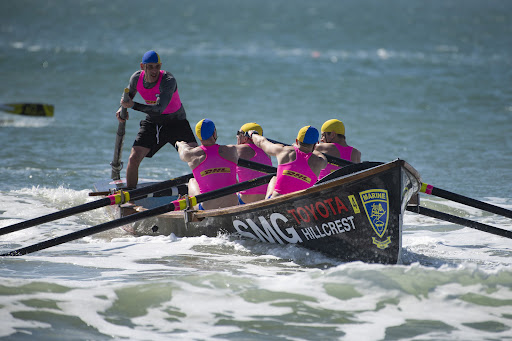 KwaZulu-Natal Marine’s men and women took to the surf and conquered the elements in winning the Wimpy Surf Boat event at the DHL Lifesaving South Africa National Championships in Gqeberha on Wednesday.

The surf boat discipline, which spanned nine heats over three days, is among the most spectacular events in surf lifesaving and the discipline is also among the toughest to navigate, negotiate and master.

The aim is to row a fiberglass 8m rowing boat through the surf, turn around and catch a wave back to the shore.

The first boat back to the beach wins.

If it sounds simple or reads matter of fact, it is quite the opposite and it takes a special breed of lifesaver to compete in this event.

Speak to the veterans of the sport and they will tell you that the “boaties” need to be fit, strong and have serious guts.

The crew is made of five members, the sweep stands at the back of the boat and steers using a long oar.

The four other members of the crew row the boat through the surf and then catch the waves back to shore.

The history of surf boats dates back to that time when most sea rescues were performed via this method.

With advancements came powered boats and jet skis and the wooden boats were no longer required for sea rescues.

The competitive sport continued with surf boat events, but in South Africa the event was scrapped and only reintroduced in 2018 among the men, and in 2019 two female crews competed against the men.

This week, six men’s crews did battle and three women’s crews competed against each other, with the competition split with a men’s and women’s championship winner.

In the men’s division, Marine B triumphed with 40 points from the nine races, Bluewater Bay were second with 36 points and Marine A third with 35 points.

The reverse was true for the women’s division, with Marine A dominant in a 27-point first place finish, comfortably clear of Bluewater Bay (16) and Marine B with 11 points.

Clifton’s seniors and juniors excelled in the surf events, with the Cape-based club winning both divisions to be crowned overall champions.

There were several standout performers in the junior and open divisions in the surf and these seniors and juniors will transfer their skillset to the pool for the remainder of the week.

The nippers will take to the surf to complete the national championships, but SA’s youngsters showed just how bright the future of South African lifesaving is, with the nippers pool championship producing 25 record-breaking swims.

Only those with first places get the new SA record and there were seven new individual national records and six new national team records.

Among those who smashed the national records, none was more impressive than 13-year-old Harties Club athlete Christian van Eeden, who owned the 100 super nipper, 100 manikin with fins and starred in the 100 rescue medley. — SA Lifesaving