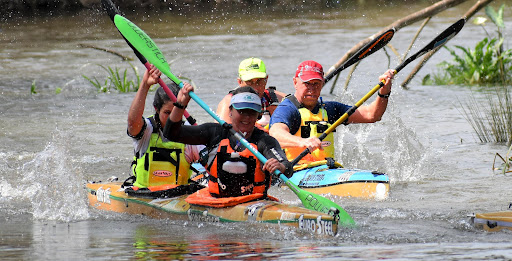 GOING FOR IT: Jordan Peek (front) and Pippa McGregor in action on a recent race on the upper uMngeni River. The two intend to go all out in the women's race at the Fish River Canoe Marathon on Friday and Saturday.
Image: GAMEPLAN MEDIA/MARY PITCHFORD

When the seeded women’s K2 batch gets under way on the first day of the Fish River Canoe Marathon on Friday, the title contenders will be keeping a close eye on the new crew of Jordan Peek and Pippa McGregor.

The two have vowed to take on the 82km of fast-flowing, big water their own way.

Peek has come off a successful season that included runner-up finishes in the Dusi and Berg River marathons, while McGregor’s decision to start paddling competitively for the first time in 2021 has led to a string of remarkable results.

“We are not the fastest crew on flat water. We know that. But the Fish is not flat,” McGregor said.

“We have made sensible decisions on boat choice and are really looking forward to the race.

“Jordy is a great paddler in big water, so we plan to use that as much as we can and then just try to enjoy the experience as much as possible.

“I trust her driving completely and we click so well in the boat together.

“I am very picky about who I paddle with, I only go for the best,” she quipped about her successful paddling results from races with her husband, Hank, and Hamish Lovemore in recent months.

The decision to paddle together was hatched after the MyLife Dusi in March, and they have cut their teeth as a combination in races on the Upper uMngeni and several KwaZulu-Natal surfski races.

“We have spent so much time together, both training and racing, and just getting to know each other, which has been great,” McGregor said.

Their race strategy will hinge on success and speed in the many big rapids and weirs on the race, and they are clear that they will be one of the handful of women’s crews determined to shoot the big Keith’s Flyover rapid 10km into the race.

While her husband winds his way home from the World Marathon Championships in Romania, McGregor will join Peek on a road trip to Cradock that will allow plenty of time for tripping the river and some fun time camping in Cradock.

After supporting her husband while she raised their two boys, McGregor set her sights on competitive paddling in 2021, largely out of frustration.

“I love to run the Comrades and when that was cancelled, I asked Hank if I should take my paddling seriously, and he really encouraged me.

“From there, everything happened organically,” McGregor said.

More information can be found at www.fishmarathon.org.za. — Gameplan Media