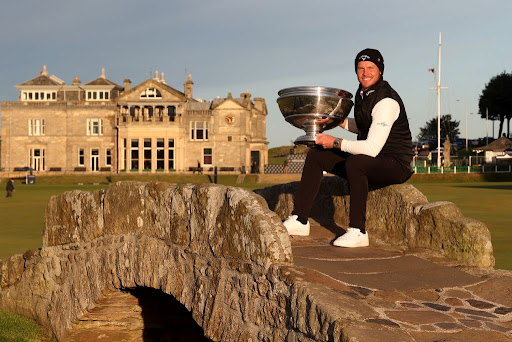 Danny Willett of England poses with the trophy on the Swilcan Bridge on the 18th hole following victory during Day Four of The Alfred Dunhill Links Championship at The Old Course on October 03, 2021 in St Andrews, Scotland.
Image: Matthew Lewis/Getty Images

Englishman Danny Willett celebrated his 34th birthday with his first win in more than two years as he held off Joakim Lagergren and Tyrrell Hatton to claim a two-shot victory at the Alfred Dunhill Links Championship at the St Andrews Old Course on Sunday.

Four birdies on the front nine helped Willett to finish with a four-under 68 and 18-under for the tournament, two better than Swede Lagergren and compatriot Hatton, both of whom faded towards the end as Willett made eight successive pars to seal victory.

Hatton, who led at the halfway stage, birdied his last hole to end with a five-under 67 for the round, while Lagergren fired five birdies on the front nine en route to a six-under 66.

Hatton’s Ryder Cup teammate Shane Lowry, who was within three shots of Willett coming into the final round, was another whose form let him down on the greens as he finished tied for fourth at 15 under.

It has been a tough year for former Masters champion Willett, who tested positive for Covid-19 in March and was rushed to hospital in June with appendicitis soon after playing at the Memorial tournament.

The win on Sunday was his eighth title on the European Tour.