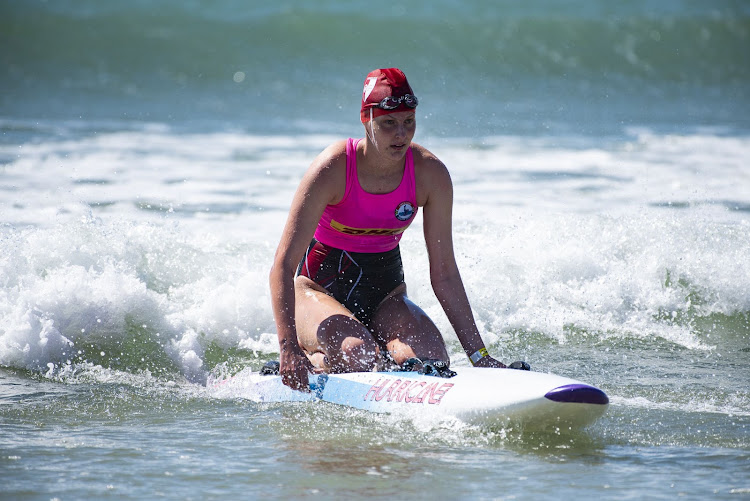 Hosts Kings Beach had good reason to cheer when Cullen Biddulph and Keegan Cooke dominated the Run/Swim/Run and the Open Surf Swim in the DHL Lifesaving SA National Championships in Gqeberha on Saturday.

Biddulph won the former and his club teammate took gold in the latter.

On a day in which the wind blew the even to an early standstill, it was Gqeberha-born Amica de Jager who blew away the opposition in winning four golds, including the prestigious Iron Woman.

Durban Surf’s De Jager, 22, was one of the competition favourites and at Kings Beach she didn’t disappoint in a glorious two-hour session, in which she won the Iron Woman, the Surf Swim, the Female Board, the Single Ski and added a silver in the Run/Swim/Run.

The intense wind meant Saturday’s schedule had to be adjusted before the organisers called an early time to events.

But nothing could stop De Jager’s charge to gold, not even Umhlanga Rocks’s in-form Sasha-Lee Corris, who placed second to De Jager on four occasions before exacting revenge with an outstanding victory in the Run/Swim/Run.

De Jager, in 2017, won the SA Junior Lifesaver of the Year award and in 2018 was the only South African to make it into the Interclub Iron final at World Rescue in Australia in 2018, but her performance on Saturday ranks as her finest as a senior in the National Championships.

And it had to be something spectacular to beat the challenge of 2018 Team SA captain Corris, who in 2019 won the Surf Swim at the international Sanyo Cup in Japan.

Wade Krieger made it an Iron double for Durban Surf in taking the Men’s title, with Fish Hoek’s Cheyn Haupt and Mark Keeling second and third respectively.

Keeling, in the Single Surf Ski, got the better of Krieger in taking gold. Krieger finished second.

Clifton, with 78 points led the Surf competition among the seniors, with Durban Surf (54), Fish Hoek (42) and Kings Beach (36) in the chasing pack.