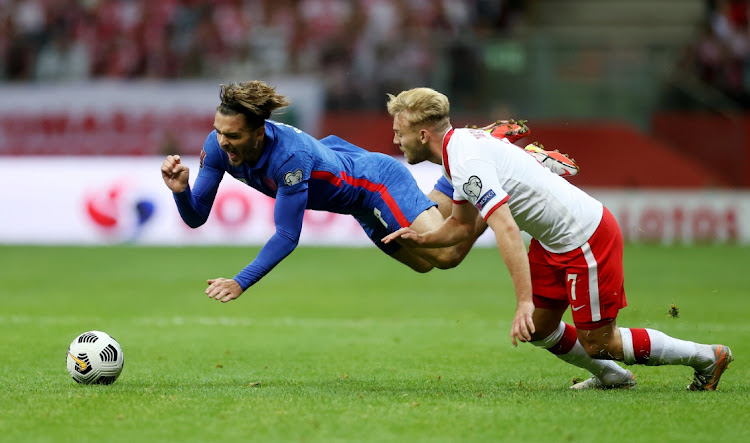 England manager Gareth Southgate defended his decision not to use any substitutes in the 1-1 World Cup qualifying draw against Poland on Wednesday.

The Poles used all five of their substitutes during the game and ended strongly, grabbing their equaliser in stoppage time.

"We were playing well, we were in control. At those moments, it's not easy to come on as a substitute and we would be taking people off for the sake of it, frankly," said Southgate.

"We were in total control, there was no issue, why disrupt it when you're in control?" he said.

The result ended England's 100% record in group I after five straight wins but still leaves the Three Lions four points clear of second placed Albania and five ahead of Poland.

Southgate said the game had been the hardest test his side had faced since losing the Euro 2020 final to Italy on penalties in July.

"It was no surprise that this was the hardest game in the group. Early in the game, we were a little slow to move the ball and Poland pressed us well.

"As the half wore on we started to get a grip of the game and gain more control without making really any clear chances - other than Harry Kane's header at the far post.

"In the second half we controlled the game. If there's a criticism it's that we didn't create enough clear chances from that possession and we didn't get enough players in the box," he said.

England showed little desire to add to their one-goal lead and paid the price but Southgate said the result had to be put in the context of a three-game span which saw 4-0 wins in Hungary and at home to Andorra.

"While it's one-nil you run the risk of what happened at the end. We're clearly disappointed not to get the three points but I have to look at what the players have done across these three matches," Southgate said.

"Given that there was no way of telling how they would react after what happened in the (Euro 2020 final), I think their mentality and application has been really good."

Poland midfielder Damian Szymanski headed in a stoppage time equaliser for the hosts to cancel out Harry Kane's opener in the 72nd minute as they ended England's 100% record in Group I.

"We didn't fear the English ... we knew they had quality and they showed it," Moder, who scored the only goal for Poland in their 2-1 defeat by England at Wembley in March, said.

"We didn't get scared, we fought until the end and I think that's the most important thing - that we believed in a good result until the end, and we achieved it."

Poland have only lost twice in the 28 games that they have played at their national stadium in Warsaw since it opened in 2012, with their last competitive defeat being a 3-1 loss to Ukraine in a 2014 World Cup qualifier.

"This is our fortress," defender Kamil Glik said. "The last match we lost here was in 2013 and it's a nice record.

"This match cost us all a lot. Today we didn't lack what we were known for - character. The old team is back with character, playing well defensively."

Poland coach Paulo Sousa, whose side has been ravaged by injuries, said the team never lost belief.

"We probably had 14 players out who could not be here and we still competed," Sousa said.

"Of course I believed ... this is our mentality ... from the first game against Hungary, we have showed we need to always focus on the task and that task is to score goals to win.

"We cannot forget that the two goals that England conceded in qualifying were against Poland ... they aren't an easy team to beat."

Poland sit third in Group I with 11 points. Albania beat San Marino to move to second, behind leaders England.