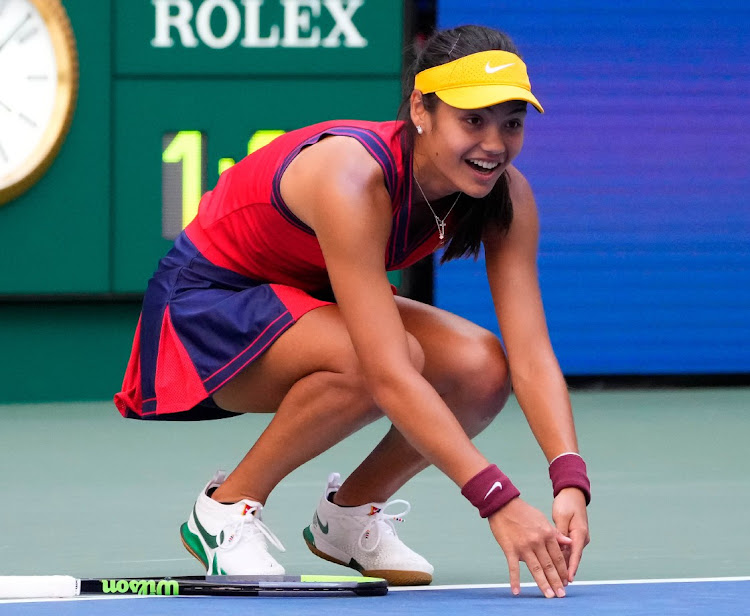 Emma Raducanu of the United Kingdom celebrates after beating Shelby Rogers of the US on day eight of the US Open at USTA Billie Jean King National Tennis Center in Flushing, New York on September 6
Image: Robert Deutsch-USA TODAY Sports

British teenager Emma Raducanu continued her dream run at the US Open on Monday by overwhelming American Shelby Rogers 6-2 6-1 to reach her first Grand Slam quarter-final.

Going through qualifying to get to the last eight at a major is a stunning accomplishment by itself, but the 18-year-old has done it without dropping a set.

Raducanu, who burst onto the scene in July by reaching the fourth round at Wimbledon on her Grand Slam debut, has gone one better at the U.S. Open in dominant fashion.

After a 6-0 6-1 hammering of Sara Sorribes Tormo in the previous round, Raducanu was nearly as ruthless against Rogers as she dispatched the last American in the women's draw in 66 minutes.

"It feels absolutely amazing to play in front of all of you and Shelby is a great opponent... she's had a great week so I knew it was going to be a tough match," Raducanu said on a packed Arthur Ashe Stadium, with the crowd buzzing over what they had witnessed.

Up next for the youngster is Swiss 11th seed and Olympic champion Belinda Bencic, who advanced with a 7-6(12) 6-3 win over Polish 2020 French Open champion Iga Swiatek.

"I feel like I'm building with each match," said Raducanu. "I'm really excited to see what I can do on Wednesday.

"Belinda's a great player who's in great form so I know I'm going to have to bring it."

Playing on Arthur Ashe Stadium court, the sport's biggest stage, for the first time, the teenager got off to a nervous start with world number 43 Rogers taking the early break to go 2-0 in front.

However, if anyone thought Raducanu would again crumble under pressure, as she had done at Wimbledon during her fourth-round exit, the Briton showed that she has come a long way in just two months.

From the third game of the match, it was one-way traffic for Britain's 150th-ranked qualifier. She quickly settled in and stormed through the next 11 games to take the first set and lead 5-0 in the second.

"It means a lot to have gone out there and to have performed," said Raducanu, clearly enjoying her moment in the spotlight. "Shelby Rogers is an extremely experienced opponent, so I knew I would have to bring it today.

"To play on Ashe for the first time, it was a little bit of a nervy experience in the beginning.

"I was really proud of myself, how I managed to settle and regroup and find a level that at the end took me to the win."

The pair battled through the 23-minute tiebreak under hot and sunny conditions inside Louis Armstrong Stadium as Swiatek saw her 5-2 lead in the breaker evaporate when Bencic won four straight points, with each player making unforced errors.

Bencic, seeded 11th, got the early momentum in the second set after breaking in the fourth game as Swiatek, who won the French Open in 2020, began to fade.

Fourth-seeded Karolina Pliskova mounted a strong defensive effort to send Russian Anastasia Pavlyuchenkova packing 7-5 6-4 in the fourth round of, keeping on track her bid for a maiden major title.

The Wimbledon runner-up fired off seven forehand winners and converted on break point in the final game in the first set, before fending off six of Pavlyuchenkova's seven break point opportunities in the second set inside the Grandstand.