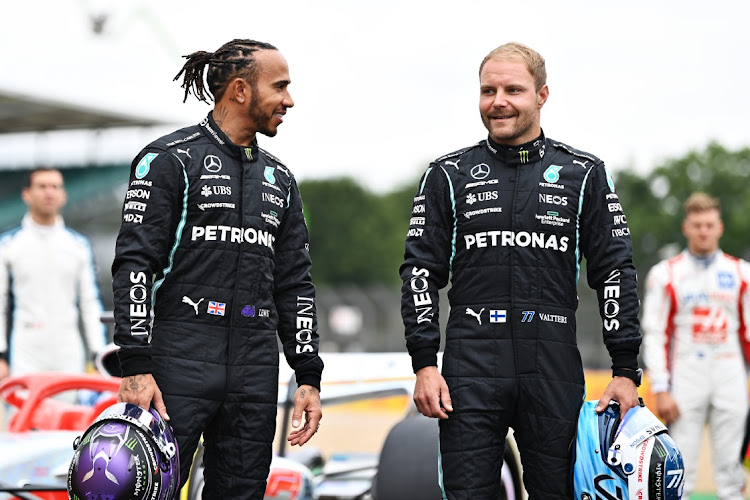 Seven-times world champion Lewis Hamilton hailed Valtteri Bottas as his best team mate after the Finn's move to Alfa Romeo from Mercedes in 2022 was announced.

Hamilton has won the title for the past four years with Bottas playing the supporting role, finishing runner-up in the championship in 2019 and 2020.

The Briton said in a message on social media that he was proud to have worked with Bottas, who is expected to be replaced with 23-year-old Briton George Russell.

"He has been the best team mate I've had the pleasure of working with," Hamilton added.

"Your speed and resilience has been impressive but where you truly stand out to me is the human being you are," Hamilton told Bottas. "You are greater than you know and I know there’s a bright future ahead for you."

Hamilton's first team mate, at McLaren in 2007, was double world champion Fernando Alonso. They ended that season level on points with Hamilton ahead on placings and the Spaniard departing after a falling-out with the team.

Finland's Heikki Kovalainen, who only won once in his F1 career, joined him in 2008 and 2009 before then-reigning world champion Jenson Button arrived at McLaren in 2010.

Button finished ahead of his compatriot in the 2011 season.

Hamilton moved to Mercedes for the 2013 season to replace Michael Schumacher alongside Nico Rosberg, a boyhood friend and rival who beat him to the 2016 title as the relationship swiftly turned frosty.

Bottas replaced Rosberg when the German announced his shock retirement at the end of the 2016 season.

"You will be missed. I wish you all the best for your future endeavours," said Hamilton. "Let’s finish off strong and get that eighth for the team."

Mercedes are leading Red Bull in the constructors' championship while Hamilton is three points behind Max Verstappen after the Dutch driver won his home race at Zandvoort on Sunday.

Meanwhile, French driver Pierre Gasly is too good to stay at AlphaTauri if there is no chance of returning to Red Bull's main team, Formula One's managing director for motorsport Ross Brawn said.

The 25-year-old was a team mate to Verstappen in 2019 but was then demoted back to the junior team after 12 races.

He has gone from strength to strength at AlphaTauri, finishing second in Brazil in 2019 and third in Azerbaijan last June while Verstappen's subsequent team mates have also been eclipsed.

"Pierre is acquiring a growing fan club in F1 and I would count myself as a member," wrote Brawn in a column on the Formula One (www.formula1.com) website.

"For him to come back from such a difficult blow after being dropped by Red Bull from their works team and return to win his first race and perform as consistently and strongly as he does with a car which won’t be as good as the works team is fantastic.

"It is a real credit to him that he’s stayed committed.

"Something will happen for him in the future. He won’t be able to stay in the family if an opportunity to return to the Red Bull works team isn’t coming. I think he’s too good for that. I think an opportunity will come at some stage."

Gasly has scored 66 of AlphaTauri's 84 points this season, with Japanese rookie team mate Yuki Tsunoda some way off the Frenchman's pace.

Red Bull have confirmed Mexican Sergio Perez as Verstappen's team mate for 2022 and are trying to bring Alexander Albon, the man who replaced Gasly in 2019, back into Formula One after a season out.