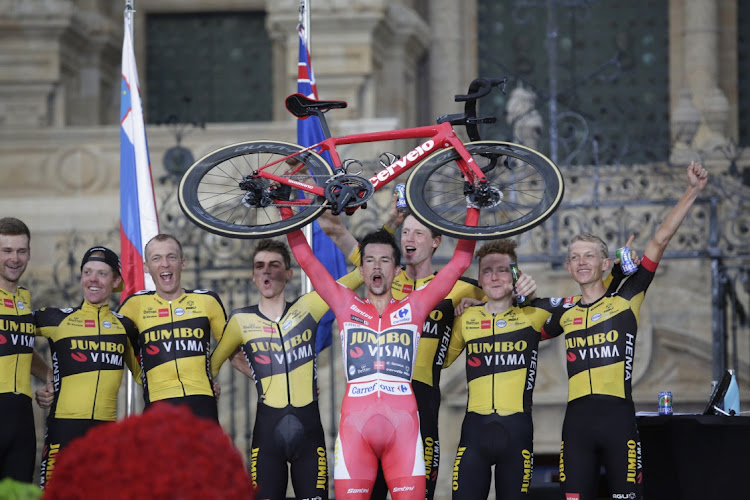 Jumbo-Visma's Primoz Roglic celebrates with his team on the podium after winning the Vuelta a Espana in Santiago de Compostela, Spain on September 5, 2021
Image: MIGUEL VIDAL / REUTERS

Slovenia's Primoz Roglic emerged victorious on stage 21 of the Vuelta a Espana on Sunday as he claimed the red jersey for a third successive year.

He finished 2:04 ahead of Movistar's Enric Mas in the general classification to cap a fine three weeks.

"It's the last stage and all this week was hard. Definitely I knew how I was on the way and still I enjoyed quite some support and crowd by the road definitely," Roglic said.

"I tried to focus on the stage. On the day itself I do my best and then you see how it goes at the end.

"It's unbelievable. It's crazy. Sometimes you win by a lot and sometimes a little. As long as you can win it's super nice. I'm not focussing on numbers, statistics or all these things. I go day by day and enjoy it and I'm honoured to be in this place."

The winning margin is the biggest at a Vuelta since Alex Zuelle in 1997.