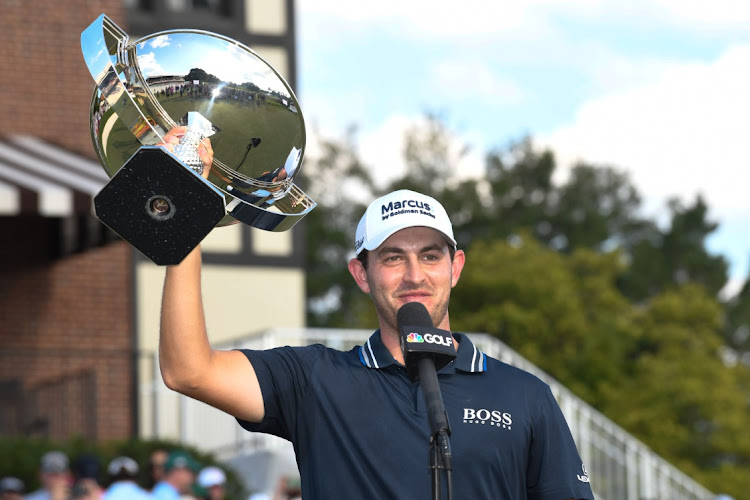 Patrick Cantlay said he enjoys the pressure in golf. He got a chance to display what he can do in such situations in Sunday's final round of the Tour Championship.

"Felt like a huge win and it was," Cantlay said. "I played great today. It hasn't even sunk in yet. I just kept telling myself to focus and lock in and I did a great job of that."

The birdie gave Cantlay a round of 1-under-par 69 to cap a riveting finishing stretch between the two golfers.

Rahm's birdie on the hole meant he finished the round with 68, pushing his tournament score to 20 under. Cantlay checked in at 21 under.

Cantlay said winning the tournament was more important than the $15 million top prize.

"The internal drive to win golf tournaments is really what drives me, and so the external factors are not as much of a factor for me," he said.

Under the format the tour has used for three seasons, Cantlay began the tournament at 10 under, putting him four shots clear of fourth-place Rahm. He needed every one of those strokes to hang on.

"It was definitely different than any other week. It was the longest lead I've ever held," Cantlay said.

"But I just tried to stay, day after day, in the present, and I did an amazing job of that this week because the last couple days I made some mistakes I don't usually make and I was able to really center myself and hit a lot of good shots when I needed to."

Rahm, the U.S. Open champion from Spain and the No. 1-ranked golfer in the world, had 16 pars in the last round. He also birdied the fifth hole.

"That stretch of (Nos.) 10, 11, 12, I was in position to put a little bit of pressure and I just didn't," Rahm said. "But at the same time, I shot my lowest score ever for four days on this golf course, which has usually been a challenge for me."

Cantlay never trailed Sunday, but he sure made it interesting. He was up by two strokes after a birdie on the 16th, but he gave that back with his third bogey of the round on the next hole.

Rahm also was contending with a well-disciplined player in Cantlay. On Saturday, Rahm praised his opponent's well-rounded game, saying he had no weaknesses.

"I think you can say he won this," Rahm said. "He played amazing golf."

Rahm opened the tournament with two rounds of 65 before catching up to Cantlay early in Saturday's round. Rahm ended up with 68 in the third round and entered Sunday's play two shots back, so the top duo was paired together again.

"I thought it felt very similar to where we had distanced ourselves from the field and it was like a one-on-one match play feel," Cantlay said. "And I think it will be great practice for the Ryder Cup."

Kevin Na shot 67 to finish at 16 under for third place. Justin Thomas, the 2017 FedEx Cup champion, was fourth at 15 under after a final-round 70, slipping one spot from the beginning of the round.

"I couldn't have played any better," Na said. "I had one bogey for 27 holes, last three rounds bogey-free."

Xander Schauffele matched Daniel Berger's 64 for the best round of the day. That put Schauffele tied for fifth place with Norway's Viktor Hovland (65) at 14 under.

The 64s were the lowest rounds of the tournament.