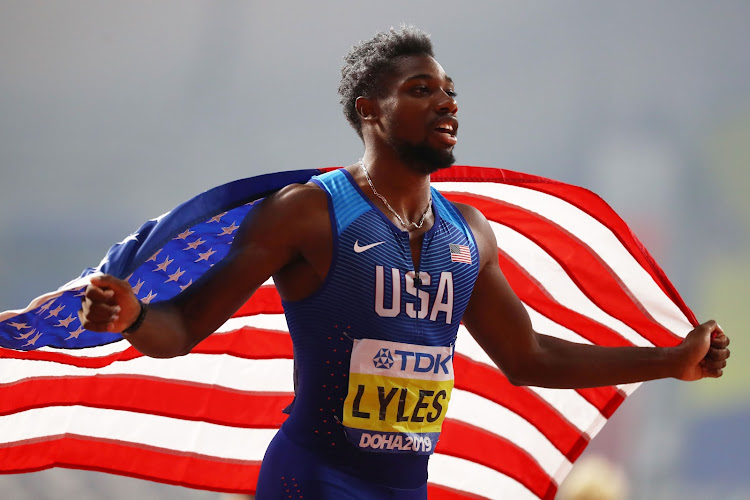 A long-held Olympic dream is about to become a reality for Noah Lyles, but the road to his first Games has not been a smooth one.

Five years after he narrowly missed the Rio Games as a teenager, the 24-year-old was finally able to call himself an Olympian after qualifying for the delayed Tokyo 2020 Games at US trials last month.

In the first Olympics to be held since Usain Bolt's retirement, Lyles will be among the leading American sprinters hoping for gold when he lines up as favourite for the 200 metres in Tokyo later this month.

"This has probably been the hardest season for me," said the rangy sprinter, speaking after the trials. "Training was knocked back three months because there was a time where my body was so busted up that I couldn't train."

Booking his place in the US squad for Tokyo crowns a period of sustained accomplishment for Lyles since finishing in fourth place at the 2016 American trials. He became world champion in 2019, and has lost only once in 19 outdoor 200m finals since missing out on Rio.

"Gosh, it sounds so nice after 2016 (when I) came up short by one place," said Lyles. "Ever since then, the mindset of becoming an Olympian has been on my mind."

Lyles stands out from others not just on the track. An outgoing personality, his creative side ranges from a love of hip hop music to an artistic flair that earned him a trip down a Paris fashion show runway.

That has helped build a following on social media, and he has actively joined in the Black Lives Matter movement to end social injustice in the United States.

It hasn't all been plain sailing for Lyles, though.

As a youth he struggled with asthma and depression, but with the encouragement of his mother and younger brother Josephus, a talented 400m runner, the one-time high jumper found his calling as a sprinter.

Lyles became the world junior 100m champion in the summer he missed the Rio Games, and in a whirlwind 2019, he ran 100m in 9.86 seconds and clocked 19.50 for 200m - the eighth fastest time ever - on top of claiming the world 200m title, accomplishments that in the eyes of many sealed his status as the new face of American men's athletics.

But 2021 brought different challenges as Lyles struggled with preparations for the Olympics amid COVID-19 restrictions, and disruption brought by the absence of his massage therapist, who fell sick.

"It took about two months for my body to go completely back to normal with all the training I'd been doing," the Florida resident said. "It's been a rough mental battle for me."

Even his brother noticed.

"We were talking at Mt. SAC (athletics meeting) and he was like, 'What are you scared of running for?'" Lyles recalled.

The times showed too. While he was one of America's top 100 metres runners in 2019, the Florida resident did not crack 10 seconds until the eighth race of this season.

That time, 9.95 seconds in the opening round of the Olympic trials, would be his fastest of the year. A sluggish start cost him in the final and he finished seventh, ending the dream of an Olympic double.

But there were other dreams to fulfil, Lyles said.

After raising a left fist encased in a fingerless glove before the 100m final, Lyles let it be known he would still campaign to end social injustice in America even as he challenges for Tokyo 200m gold.

Asked about the fist and glove gesture that echoed 1968 Olympics Black Power salutes by U.S. sprinters Tommie Smith and John Carlos, Lyles said, "It's just something I believe in.

"I felt like it was important that I throw up some symbol. I've done it before and I'm going to continue to do it."