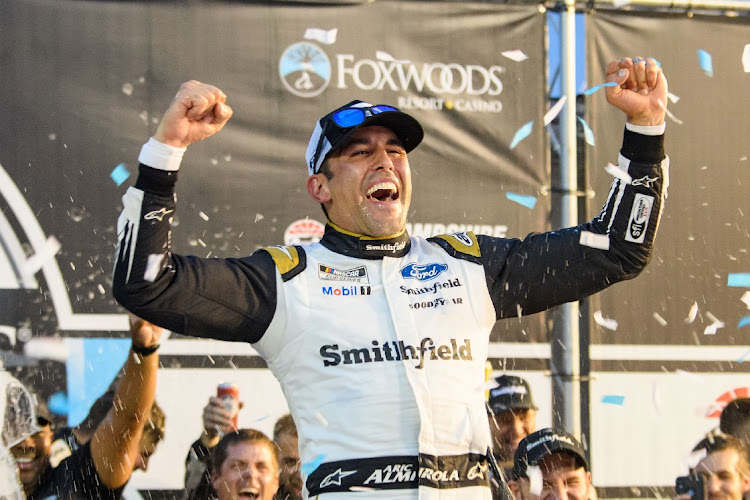 Aric Almirola's season of disappointment took a big-time turn for the better on Sunday when he won the darkness-shortened, weather-disrupted Foxwoods Casino 301 at New Hampshire Motor Speedway.

The victory in the race, which was shortened from 301 to 293 laps because of darkness, was Almirola's first of the season and puts him into the playoffs, a position that he was in huge danger of missing when he arrived at the New Hampshire mile.

The finish was just his second in the top five all season. He entered the race 27th in points with just five races remaining before the start of the 16-driver, 10-race playoffs.

"We've been through so much," Almirola said. "The team and everybody has just been working so hard. There have been so many people who have continued to support us through the crappiest year ever. Man, this feels so good for them.

"There is no doubt we have struggled. But guess what. We are going playoff racing."

Almirola also gave Stewart-Haas Motorsports its first victory of the season. It was the fourth of his career.

A year ago, Almirola had six top-five finishes and 18 top-10s in making the playoffs on points.

"This is by far one of my favorite race tracks," Almirola said when asked if he thought he had a chance at victory. "I love coming up to the New England area and racing. I had this race won a couple of years ago and I gave it away."

Finishing second was Christopher Bell of Team Penske, who made a race of it when Almirola got stuck in traffic with under 10 laps to go. The margin of victory was .69 seconds.

"It stings, man," Bell, who won Saturday's Xfinity Series race at NHMS, said of finishing second and having the race end early. "I probably had a little bit better pace than him and I was able to get to him. It was going to be a heck of a race.

"We had a shot at it. I just wish we would have had eight more laps."

His teammate Joey Logano, who survived a two-lap penalty early in the race, finished fourth.

Ryan Blaney of the Penske team was fifth while Kevin Harvick, looking for his first win of the season, was sixth after leading a race-best 66 laps.

Trouble visited the race on Lap 6 when NASCAR officials allowed the race to proceed despite rain falling. Both leader Kyle Busch and second-place Martin Truex Jr - who are teammates at Joe Gibbs Racing - spun on the wet track. Several other cars, including that of JGR's Denny Hamlin, spun further back in the field.

Busch's car, which started on the pole, suffered major damage from hitting the wall and he was out of the race.

Officials threw the caution flag and then the red flag to stop the race.

"We started the race under a mist," said Busch, who was coming off a runner-up finish to his brother Kurt a week ago at Atlanta. "It never should have went green to begin with. But then it kept getting worse and worse. The lap before (the spins), I went into (Turn) 1 and it shoved the nose really bad and I was able to keep it under control.

"We'd been talking about it for two laps that it was raining. No sense in saying what I want to say. It doesn't do you any good. We're done. We're going home."

Truex, who suffered less damage than Busch, said, "I hollered on the radio (to NASCAR officials) that the track is wet. Like wet, wet."

Said Denny Hamlin, whose car suffered minor damage, "You just rely on NASCAR to do their part and that is allowing the corner spotters to tell them when the surface is unsafe for debris, rain, whatever it is."

Steve O'Donnell, executive vice president and chief racing development officer for NASCAR, said there was a mist falling in the laps leading up to the wreck and that the rain picked up.

But, "just as (the starter) was about to put out the yellow, we looked down and the 18 car (Busch) was already getting loose," O'Donnell said. "The track got slick in a hurry."

The race resumed at about 5:30 p.m. Eastern with Chase Elliott in the lead.

The series will take the next two weekends off before returning to the road course at Watkins Glen on August 8.