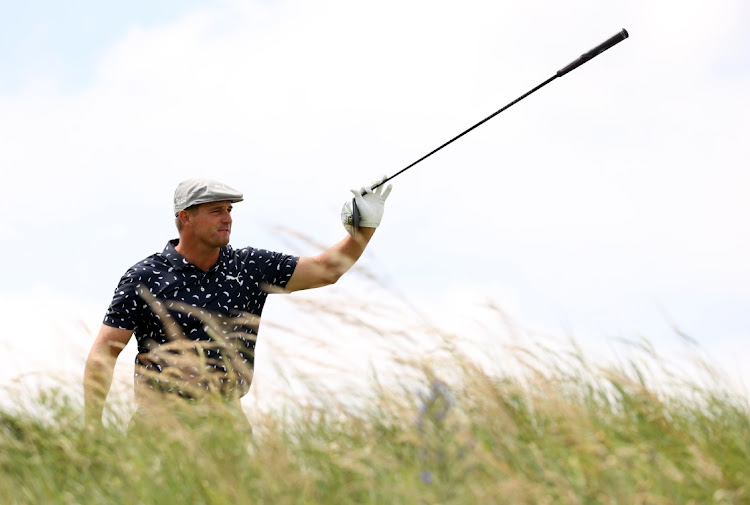 Bryson DeChambeau of the US reacts with his driver in hand during the first round of The Open Championship at Royal St George's, Sandwich
Image: LEE SMITH / REUTERS

Golf equipment manufacturer Cobra said Bryson DeChambeau's comments about his driver following his one-over-par start to the British Open were "stupid" and that the American was like "an 8-year-old that gets mad at you".

DeChambeau, who has packed on roughly 30 pounds of muscle and become the longest hitter on the PGA Tour, said his driver "sucks" after he found just four of 14 fairways at Royal St George's on Thursday.

The 27-year-old, who finished the day seven shots adrift of first-round leader Louis Oosthuizen, currently uses a Cobra Radspeed driver that is 46 inches long and has only five degrees of loft.

Most golfers on the PGA Tour opt for lofts of between nine and 10.5 degrees for their drivers.

"If I can hit it down the middle of the fairway, that's great, but with the driver right now, the driver sucks," DeChambeau said.

"It's not a good face for me, and we're still trying to figure out how to make it good on the mis-hits. I'm living on the razor's edge, like I’ve told people for a long time."

Cobra's tour operations manager Ben Schomin, who caddied for DeChambeau two weeks ago at the Rocket Mortgage Classic, said the team had been working tirelessly to accommodate him.

"It’s just really, really painful when he says something that stupid,” he told Golfweek.

"He has never really been happy, ever. Like, it's very rare where he's happy," Schomin said of DeChambeau's demands of his driver.

"Now he's in a place where he's swinging a 5-degree driver with 200 mph of ball speed. Everybody is looking for a magic bullet. Well, the magic bullet becomes harder and harder to find the faster you swing and the lower your loft gets."

Schomin compared DeChambeau's frustration to "an 8-year-old that gets mad at you".

"He didn't really mean to say it that harshly. He knows how much everyone bends over backwards for him, but it's still not cool," Schomin said.

DeChambeau issued an apology for his "unprofessional" comments.

"My frustration and emotions over the way I drove the ball today boiled over," DeChambeau said. "I sucked today, not my equipment. ... I deeply regret the words I used earlier."