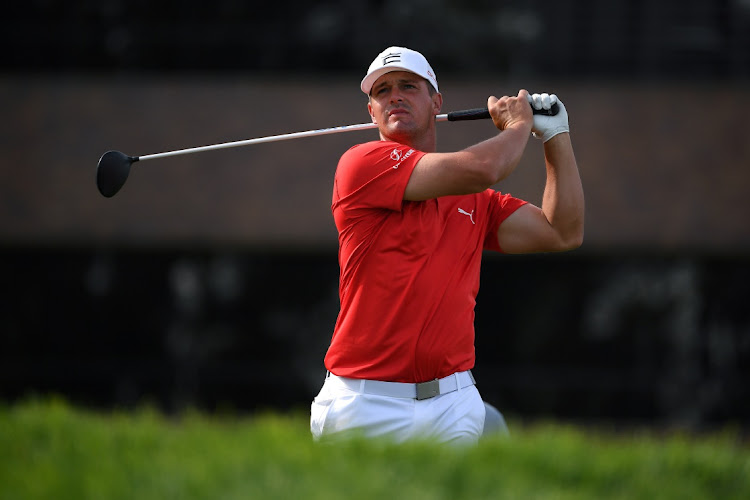 Bryson DeChambeau plays his shot from the 14th tee during a practice round ahead of the US Open at Torrey Pines, San Diego, California on June 15, 2021
Image: Orlando Ramirez-USA TODAY Sports

Bryson DeChambeau pushed back on the notion that his game is not suited for links golf, saying that he "can do anything and everything" based on the conditions.

DeChambeau prepped for his fourth appearance at The Open with a practice round with Phil Mickelson on Monday afternoon at Royal St. George's in Sandwich, Kent, England.

"My best is when I can do anything and everything,'' DeChambeau said, per ESPN. "I can hit a low driver bullet, if I really wanted to do. And when it gets really windy I will flight it down. So the conditions dictate everything. I hit it high at the U.S. Open because that's what was required.

"But I won't know until (that) day. The conditions could be completely different, the wind completely opposite. Downwind I might be fine or if it's into the wind I've got something totally different.''

"Tim and I are good," DeChambeau said Monday. "He's a good friend of mine, but that was a tough week and glad to move on from it."

Zach Johnson announced that he tested positive for Covid-19 and has withdrawn from The Open, which he won in 2015.

Johnson joins a list of 16 other players who have withdrawn, several due to Covid protocols in place for the tournament that starts on Thursday.

The 34-year-old de Jager was set to make his Open debut on Thursday.

Johnson, 45, a two-time major winner, was tested following the final round at the John Deere Classic on Sunday.

He fortunately got his positive test back before boarding a charter flight filled with caddies, managers and 16 players bound for Royal St George's. Johnson finished T34 on Sunday.

"I am disappointed to announce that I have tested positive for covid-19 and will have to withdraw from the 2021 Open Championship," Johnson tweeted. "I look forward to returning to St Andrews next year, a place where I have such wonderful memories. Good luck to all the competitors."

Johnson was replaced in the field by Sam Horsfield of England, while de Jager was replaced by Dylan Frittelli.

Ryan Moore, who qualified for The Open after his tie for second at the John Deere, declined his spot, citing a back injury. He was replaced by Adam Long.