Perez proves he is up to speed at Red Bull 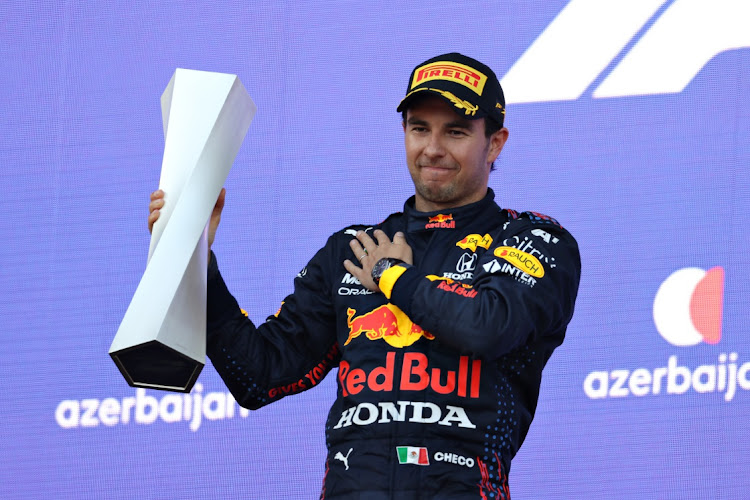 Sergio Perez of Mexico and Red Bull Racing celebrates on the podium after the F1 Grand Prix of Azerbaijan at Baku City Circuit on June 6, 2021 in Baku
Image: Clive Rose/Getty Images

Sergio Perez said before the Formula One season started that he needed five races to get up to speed with Red Bull and the Mexican duly delivered by winning the sixth in Azerbaijan on Sunday.

If victory fell into his lap after team mate Max Verstappen crashed out with a tyre blowout five laps from the end while leading, it was still richly deserved.

Perez had qualified only seventh, moving up to sixth after McLaren's Lando Norris was demoted, but he showed his pace throughout.

The Mexican made up two places on the opening lap, was third by lap eight and had slotted into second behind Verstappen by lap 12.

Perez joined Red Bull at the end of last season, after being replaced by four times world champion Sebastian Vettel - second on Sunday - at what is now Aston Martin.

It had looked at one point last year like he might have to leave the sport, at least until he took a first grand prix win in Bahrain in December, and Perez said victory with his new team felt "very, very sweet.

"They have given me a massive opportunity," he added.

"We didn’t have the start of the season we were hoping for. I found my adaptation harder than expected but we have been working extremely hard since day one with the engineers back at the factory.

"Finally we got a very good result for the team."

Perez had finished fourth in Portugal and Monaco and fifth in Spain and Bahrain, with an 11th at Imola his only finish outside the points this season.

"This definitely gives a big boost of confidence to myself and also to my team, to my side of the garage," he said after an afternoon that held plenty of challenges.

He revealed that he had been told by the team not to weave to warm the tyres at the re-start because of concern about a mechanical problem and was told to stop as soon as he took the chequered flag.

Perez also had to out-race seven times world champion Lewis Hamilton into the first corner at the re-start, with the Mercedes driver locking up and going off the track.

"Getting your first win in Formula One is something unbelievable but getting a first win with a new family, with a new team, I feel like it gets you together more," he said. (Reporting by Alan Baldwin, editing by Ken Ferris)

Meanwhile, the two high-speed tyre blowouts during Sunday's Azerbaijan Grand Prix may have been caused by external factors such as debris, tyre supplier Pirelli said.

Red Bull's Formula One championship leader Verstappen and Aston Martin's Lance Stroll both crashed out after rear-left tyres blew suddenly at speed on the same stretch of straight.

"We need to clearly establish the facts behind the incidents," Isola said.

"What we can say for now is that there was also a cut found on Hamilton's tyre, and that it's the rear-right tyre that actually works harder than the rear-left here.

"No warnings or vibrations were detected and none of the other tyres of a similar age or older showed any signs of excess wear. So we can not exclude that the damage was caused by an external factor."

Isola said he understood the need for answers.

Verstappen angrily kicked the rear-left of his car after getting out of the wreckage but team bosses were careful not to speak of tyre failure.

"It looked like the (tyre) wear was all in good shape," said Red Bull boss Christian Horner.

"We were managing the tyre pretty well... it suddenly deflated. Whether it's a bit of debris from the shunt earlier, you just don't know. Let's get the tyre back and look at it fully."

Stroll crashed on lap 31 of 51 when he was the only driver still to pit. Verstappen's blowout happened five laps from the end, with the race re-started with drivers on fresh tyres.