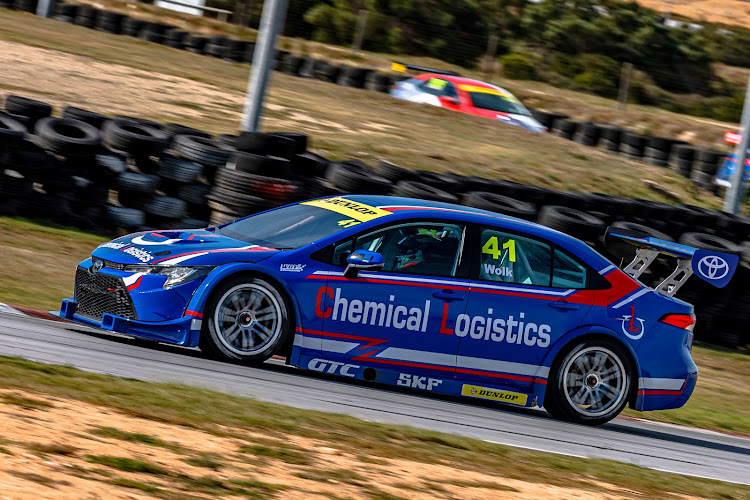 He then fought from the back of the reverse grid second-race grid to challenge for the lead in a dramatic finish, coming home second in the end to win the day and move back into a slender GTC championship lead.

Teammate Julian van der Watt celebrated his new title sponsor in style when he fought his way to a fine second in heat one aboard the AutoZone Ford Focus, with Scott Temple fourth in the second Chemical Logistics Corolla.

Both drivers, however, fell victim to dramas in the half-hour second race of attrition.

The weekend started on the front foot for the Investchem GTC lads, with Wolk on pole position, Van der Watt third and Temple fourth on the grid.

Lee Thompson was a happy second in the Universal Health BMW, but it was a tough start for Wolk’s chief rival, Michael van Rooyen, who was hit with an overboost penalty to slip from fourth to sixth behind Gazoo Toyota Corolla teammate Mandla Mdkane.

Wolk then charged off to an emphatic first-race win, setting the fastest lap as he went.

Behind him, Van der Watt overcame Lee Thompson to keep Wolk honest throughout, with Thompson in chase from Temple, who crucially held Van Rooyen at bay, with Mdkane sixth.

Those six started the 30-minute second race in reverse order, as Van Rooyen took the lead at the start and made off up front.

Roadblock Mdkane did his best to keep the rest at bay, which played into Wolk’s hands.

Wolk managed to take advantage of the scrapping others and quickly found a way through to second, but Van Rooyen was long gone.

Mdkane meanwhile succeeded in keeping Van der Watt, Temple and Thompson at bay until lap 13, when Temple made a move around the outside of the hairpin, but the two collided and Temple was left stranded in the dirt on the outside.

Van der Watt used the opportunity to pounce on Thompson, but a rear control arm broke on the Ford and he too spun wildly before joining Temple and Mdkane in the pits with the teams frantically trying to sort out their stricken machines.

Wolk had meanwhile whittled the lead down and was right on Van Rooyen’s rear bumper into a dramatic final tour as the duo also dealt with lapped traffic.

They were side by side into the final corner, but Michael held on to take a super close win.

“That was almost a perfect race weekend,” Wolk said.

“Special thanks to Ian Schofield, Stuart Thompson and the WCT Engineering team for a great car — that one was for you guys and the great effort we have all put in to make it happen.

“I had great pace from the start of race one and the car was great throughout and now we have finally won a race too!

“The second race was a different challenge.

“I managed to take advantage of the fight to pass Mandla and get up to second quickly enough from my reverse grid sixth, but Michael was long gone so I just put my head down and closed the gap right down.

“I got alongside into the final turn, but it was the wrong side. What a race!

“Now we look ahead to East London early in July — this championship is turning into a huge fight and I'm enjoying every battle along the way.”