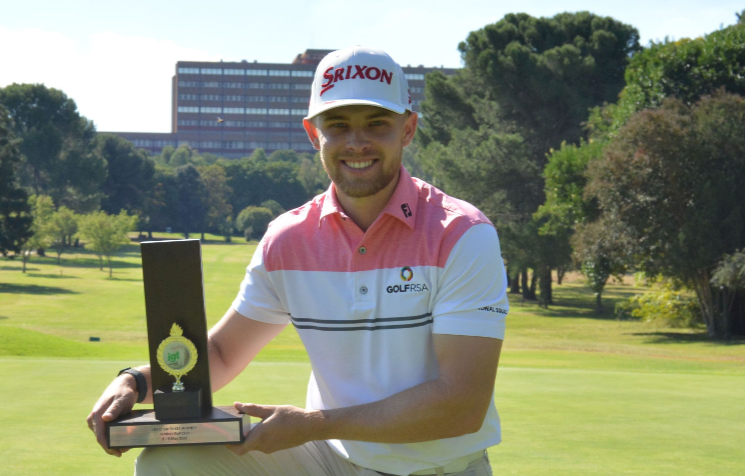 The Bay’s Kyle de Beer became the latest GolfRSA Elite Squad member to claim victory on the Big Easy IGT Tour after he raced to a three-shot win over Drikus Joubert in the IGT Tour Chase To #24 at the Service Golf Club.

The 23-year-old Port Elizabeth Golf Club player entered the final round tied for the lead with fellow amateur Adam Breen, both at 12-under, but a final-round 67 placed him well beyond the reach of any chaser.

A total of 17-under earned him his maiden tour title and a spot in the ever-growing list of GolfRSA’s representatives who have claimed career-altering victories on this circuit.

“The talent in the squad is just ridiculous,”  De Beer said on becoming the latest member of that squad to win a professional tournament.

“I’m very happy to join a couple of my mates who have won on the IGT and Big Easy.

“There are so many good players in the squad; I’m not surprised that a few have won on tour, and I believe many more will win in the future.”

De Beer knew from day one when he posted his first-round 66 that the week was going to be tough and while his second-round 66 made it all look like it was easy, the fifth-ranked amateur in the country was never deluded.

He knew he still needed a good score if he was to contend for the title and two birdies in the first two holes gave him an ideal start.

He dropped a shot, however, on three and would only make up for that shot later on when he made another birdie on seven to turn in 34.

A birdie soon after the turn followed before two more — on 14 and 18 — made up a bogey-free back nine for a total of five-under-par 67.

“It was always going to be tough today,” he said.

“I had a couple of sloppy shots on the back nine today which forced me to stay focused because it could have easily gotten away from me.

“Luckily, a couple of chip shots and putts that I needed to make went in.

“The only time I knew it was game over was when I hit my second shot onto the green on 18, and then I knew that it was pretty much sealed.”

De Beer joins the likes of Casey Jarvis, Christiaan Maas and Ryan van Velzen, who has since turned pro, in the list of recent GolfRSA squad members to win.

Despite a gallant fight in the final round, Joubert will have to do with a runner-up spot at 14-under while Breen’s tournament total of 13-under means he will settle for third this week.