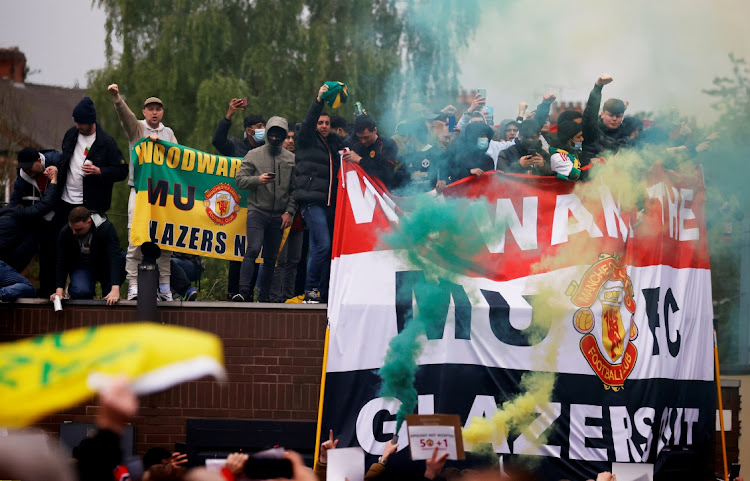 Manchester United will punish fans who committed criminal acts during the protests on Sunday which led to the Premier League game against Liverpool being postponed, the club said on Monday.

United fans protesting against the club's American owners, the Glazer family, stormed into the stadium which was closed to fans due to Covid-19 restrictions.

"The majority of our fans have and will condemn criminal damage, along with any violence towards club staff, police or other fans, and these now become a police matter," United said in a statement.

"The club has no desire to see peaceful protestors punished, but will work with the police to identify those involved in criminal activity, and will also issue its own sanctions to any season ticket holder or member identified, per the published sanctions policy," the statement added.

A flare was thrown at the broadcasters podium as fans ran on to the field and protesters clashed with police outside the ground.

Greater Manchester Police (GMP) said six officers were injured during the demonstrations, with one suffering a fractured eye socket, and another sustained a wound to his face, following bottles and cans being thrown from the crowd.

A third officer was dragged and kicked.

GMP said a 28-year-old man has been arrested in connection with the protests and added that it was "reviewing all obtainable evidence" to identify the organisers of the demonstration and those responsible for assaulting officers.

"The behaviour shown at this protest was absolutely atrocious," GMP Assistant Chief Constable Nick Bailey said in a statement.

"Officers were just trying to do their job and facilitate a peaceful protest."

The Premier League said it recognised the strength of feeling among fans.

"We are committed to maintaining close dialogue with supporters and their representatives, as we work with The FA and government to identify solutions, but ask that all protests are peaceful," the Premier League said in a statement.

"The actions of a few clubs cannot be allowed to create such division and disruption. We are determined to establish the truth of what happened and hold those clubs accountable for their decisions and actions."

The fan protests against the Glazers, which have taken place since they bought the club in 2005, have been reignited since United's involvement in the attempt to create a breakaway European Super League.

Prime Minister Boris Johnson, who publicly opposed the Super League plans, said he understood the motives behind the protests.

"I don't think it's a good idea to have disruptive behaviour, demonstrations of that kind, but on the other hand I do understand people's strength of feeling," Johnson told reporters.

"I fully understand the long-standing concerns of Manchester United supporters about both the ownership and financing of their club and the wider running of football," he said.

"It is important to make clear that the majority of supporters made their protest peacefully ... however, there is no excuse for the actions of a minority who injured police officers and endangered the safety of others."

No decision has yet been made on the rescheduling of the match or about any sanctions.

"Information on the rescheduling of the game and any possible implication on other fixtures will be announced after discussion and agreement with the Premier League," United said.