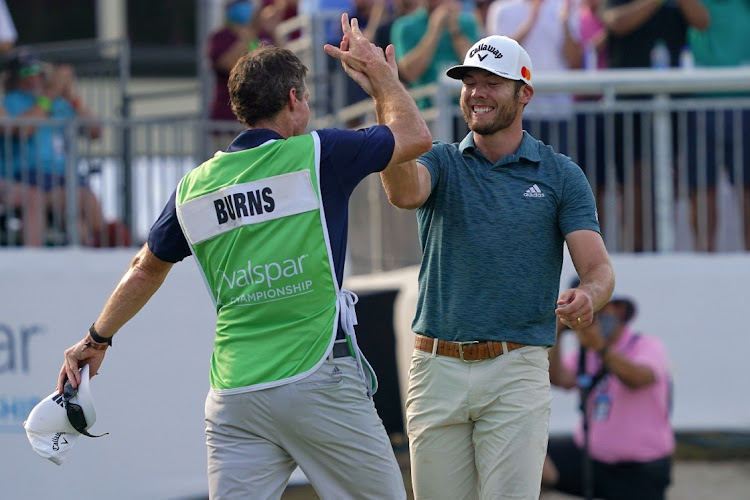 Sam Burns fired a three-under-par 68 for his first PGA Tour victory, a three-shot win over his third-round co-leader Keegan Bradley in the Valspar Championship in Palm Harbor, Florida, on Sunday.

Burns, who shot a 17-under 267 for the tournament, finished Sunday's round with bogeys on two of his final four holes, but his one-under on the back nine of Innisbrook Resort's Copperhead Course was enough. He also recorded three birdies on the back nine.

Burns, who has finished in the top 10 in four tournaments this season, said those opportunities gave him a better understanding of what it takes to win.

"I think having those past chances that I wasn't able to convert, I think it got me ready for this moment. Going into the back nine, (caddie) Travis (Perkins) and I just really wanted to stick to our game plan, stick to the process of just being really engaged on each shot and we were able to do that."

Bradley's back nine, on the other hand, included a double-bogey, a bogey and no birdies. His even-par 71 on Sunday left him at 270 and alone in second place.

Bradley either led outright or was tied for the lead through the first three rounds.

"I just didn't hit the shots I needed to coming down the end," Bradley said. "But I'm proud of the way I finished off to come in solo second. A lot of points at stake, World Ranking points, so that, I can take that away from it."

Bradley, a four-time Tour winner including at the 2011 PGA Championship, added that his game is "in great shape.

Viktor Hovland of Norway shot the day's best round, a 65, to move up into a tie for third at 271 (13 under). He recorded five birdies on the front nine and seven for the day.

"I putted really good today and hit a lot of good iron shots that ended up close to where I didn't have to do a whole lot to make a birdie," Hovland said.

"Yeah, I did hit some bad iron shots today, and I did feel like I struggled to cut it into those right hole locations. But the few bad iron shots that I hit, I was really able to hit some really nice saves and some putts for par."

Also at 271 was Cameron Tringale, who had three birdies on the front nine but lost ground on the back nine, with two bogeys to go with two birdies.

Mexico's Abraham Ancer shot 2 under on Sunday to finish alone in fifth place at 12 under.

Vaughn Taylor (3 under for the day) and Max Homa (3 over) were tied for sixth at 10 under.