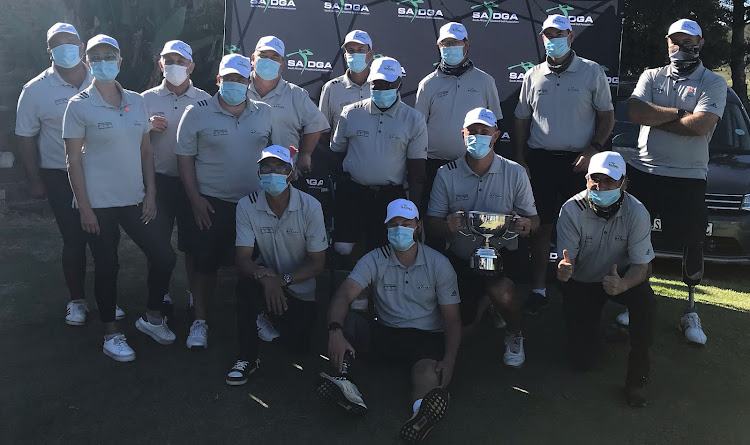 Team South stormed to victory in the SADGA Provincial Challenge, beating Team North 17-6 at the Uitenhage Golf Club on Sunday.

After the first day’s play which saw the teams tied on 2.5-2.5, Team South played exceptional golf on day two.

Of the eight points available via alternate-shot and better-ball, South managed to claim an astonishing seven which gave them a mammoth 9.5-3.5 lead.

With Team South needing just three points available from the singles on Sunday, the North had a mountain to climb and one which proved insurmountable.

Leg-amputee Kean Dry made a fast start in his match against Derrick Swart, racing to a 6-up advantage after seven holes before ultimately prevailing 7 and 6.

Uitenhage Golf Club’s Christo de Jager capped a phenomenal weekend at his home track with a comprehensive 6 and 5 win over Dean Ferreira.

De Jager secured 3.5 points out of a possible four over the weekend.

With the result determined, there were also victories for Kosie Janse van Rensburg (6 and 4); Trevor Reich (4 and 2) and Lance du Toit (3 and 2).

The North did, however, manage a couple of consolation wins, with Hanjo Bester (3 and 2) and Rupert Fortmann (2 and 1) ending the weekend on a high.