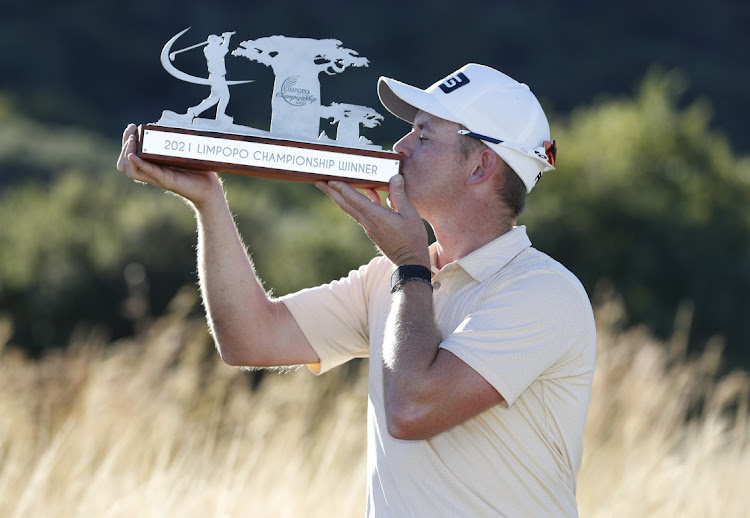 INVINCIBLE: SA's Brandon Stone shows off the trophy after winning the Limpopo Championship at the Euphoria Golf Club in Modimolle on Sunday
Image: LUKE WALKER/GETTY IMAGES

Garrick Higgo held off the challenge of in-form Maximilian Kieffer to win his second European Tour title at the 2021 Gran Canaria Lopesan Open.

The South African had carded the lowest round of his European Tour career with a 63 on day three to put himself in the driving seat and he had extended his lead to four shots by the turn.

Kieffer — fresh off a playoff defeat last week in Austria — came home in 30 to sign for a 62 and pile on the pressure but Higgo kept his cool and registered another 63 to get 25 under and seal a three-shot victory.

Dane Jeff Winther picked up four shots in his last three holes to sign for a 64 and get to 21 under, two shots clear of England's Sam Horsfield.

Higgo's maiden victory at last season's Open de Portugal at Royal Óbidos came in just his seventh event and this triumph at Meloneras Golf arrives in his 24th.

That makes him the fastest South African to two wins in European Tour history not including Major Championships, and the victory could also move him up to a career-best 65th on the Official World Golf Ranking.

“It's quite a relief finishing now.

“It wasn’t over until the last hole really, I knew anything could happen, especially with the wind coming up.

“It was a bit stressful. I am just going to keep going forward.

“I have worked really hard with my coach and everyone back at home, so it feels amazing”

Meanwhile, the night before the final round of the Limpopo Championship, Brandon Stone sat on a deck with a glass of Amarula in hand and watched a magnificent African sunset over the bushveld.

Life was good, but, one day and 19 holes later, it got even better for him.

Stone, 28, birdied the first extra hole to win a four-man playoff for this Sunshine Tour and European Challenge Tour co-sanctioned tournament at the Euphoria Golf and Lifestyle Estate at Modimolle in the Waterberg on Sunday.

It was the fifth victory of his professional career.

But, more significantly, it was his first Challenge Tour victory, his first playoff victory, and a much-needed win amid a frustrating and uncertain time of Covid-19-interrupted schedules and global travel restrictions.

“I’m very happy to have this trophy in my hands.

“Every victory is special, and to win at home even more so.

“I haven’t won in a few years.

The Rustenburg-born golfer made the perfect start in Sunday’s final round, and, with two birdies and an eagle on the front nine, he turned at 10 under par for the tournament and with a two-stroke lead.

But three bogeys and a solitary birdie in five holes from the turn opened the door for the rest of the field.

With the closing holes to come, Stone was suddenly in a four-way tie for the lead on eight under with Hennie du Plessis, Oliver Bekker and Daniel van Tonder.

That is how regulation play ended, sending them all back to the par-five 18th for the playoff.

And then Stone played the hole to perfection as he won with a birdie to the pars of the rest.