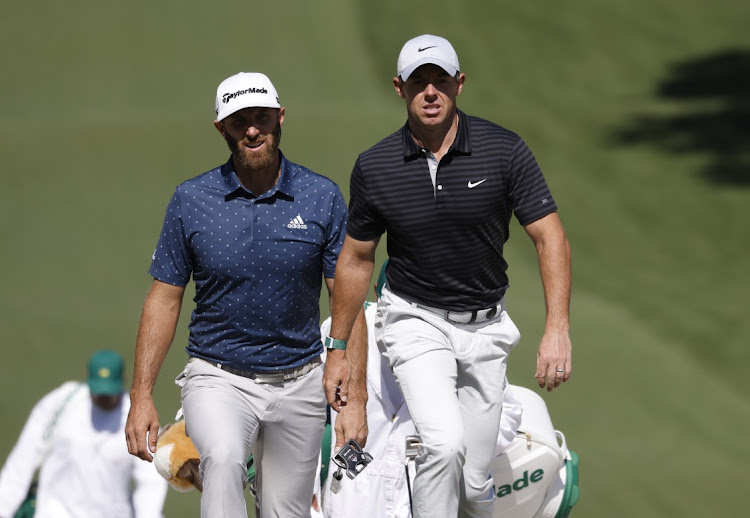 Northern Ireland's Rory McIlroy and Dustin Johnson of the US on the 7th hole during a practice round ahead of The Masters at Augusta National Golf Club, Georgia
Image: MIKE SEGAR / REUTERS

Like Augusta National's famous azaleas it is a storyline that pops up every April at the Masters, will Rory McIlroy finally win a green jacket and complete the career slam?

Only five players have ever won golf's career Grand Slam and each year since his British Open triumph in 2014 McIlroy has cruised up Magnolia Lane hoping to join Tiger Woods, Jack Nicklaus, Gary Player, Gene Sarazen and Ben Hogan in the club.

The golfing Gods have teased McIlroy as the Northern Irishman has come close to completing his initiation, posting top five finishes three of the last six years but never closing the deal.

This week he arrives at Augusta with his ranking and form in decline but oddsmaker still fancy the 31-year-old who is pencilled in as the co-fifth favourite at 14-1 by Sportsline alongside former-winner Jordan Spieth.

On results alone there has been nothing in the run up to the year's first major to suggest that McIlroy's time has come.

The only splash McIlroy made at his next event the WGC Match Play came when a tee shot ended up in a backyard swimming pool.

Already one of golf's big hitters McIlroy felt an urge to add even more power after watching Bryson DeChambeau bludgeon Winged Foot into submission on way to winning last year's US Open.

Later conceding he got "sucked into that stuff", McIlroy's search for more distance introduced flaws into his swing and something he has been trying to correct ever since.

"After Winged Foot I had a few weeks before we went to the West Coast and I started to try to hit the ball a bit harder, hit a lot of drivers, get a bit more speed, and I felt like that was sort of the infancy of where these swing problems have come from," McIlroy said. "So it’s just a matter of trying to get back out of it."

McIlroy is now in full reboot mode, the four-time major winner bringing in swing coach Pete Cowen to help with the debugging.

"It seems like to me he went after distance," said Curtis Strange, winner of back-to-back US Open titles and runner-up at the 1985 Masters. "It messed him up a little bit. Now he's got to go back.

"How long it takes him to get back to a comfort zone, only he knows, and maybe he doesn't know."

McIlroy says he is learning more about his swing with his new instructor so he can identify and fix problems on his own during rounds.

In light of some recent inconsistent form, legitimate questions are swirling around about whether his game is quite at the level needed to contend for a Green Jacket on Sunday.

"He's got a lot of knowledge and a lot of wisdom ... That's the reason I brought him in," McIlroy said of Cowen.

"It's basically just about trying to understand the body movements a little bit more and sort of understanding why certain shots happen and how to fix those on the fly."