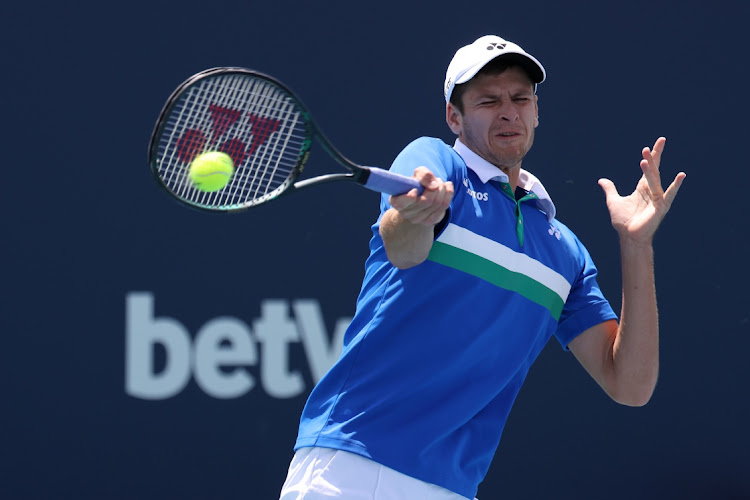 TENNIS Hubert Hurkacz of Poland hits a forehand against Jannik Sinner of Italy in the men's singles final in the Miami Open at Hard Rock Stadium on April 4, 2021
Image: Geoff Burke-USA TODAY Sports

Poland's Hubert Hurkacz was vaulted into the top 20 for the first time in his career on Sunday after clinching his maiden Masters 1000 title at the Miami Open, a win he said provided added "motivation" to succeed.

The 24-year-old downed Jannik Sinner 7-6(4), 6-4 in the men's final as a handful of double-faults in the match proved costly for his 19-year-old Italian opponent.

"Obviously I was trying to stay as solid as I can, because he can hit the balls so hard ... if you let him do that, like, he's just gonna run around," he told reporters after the match.

"So I was just trying to keep his pace and be able to fight for each ball."

Hurkacz outlasted fierce competitors including fifth-ranked Greek Stefanos Tsitsipas and eighth-ranked Russian Andrey Rublev in the quarter- and semi-finals, respectively, en route to the biggest victory of his career, a triumph he was sure to savour.

"I had a big belief in myself ... Winning the tournament like this like gives you extra, I think, like motivation and self-confidence," said Hurkacz, now 16th in the world.

Hurkacz was well-suited to the at-times hot and balmy conditions in Miami after spending nearly half of last year in Florida. He won the Delray Beach Open in January, as well.

"I was solid throughout the whole tournament, and I was able to get through each round, was even more pumped for the next round. So I think that's something special for me," he said.

"My tennis is getting better."

Meanwhile, Sinner said nerves had played a big part in the defeat.

The 19-year-old would have been the Miami event's youngest winner had he defeated Hurkacz but lost 7-6(4) 6-4 to the Pole, who he occasionally partners in doubles.

"When you're 19 and playing finals, obviously it's tough, and I wanted to win," Sinner, who won the 2019 ATP Next Gen Finals, told reporters.

"I was a bit nervous from the beginning of the match or already yesterday, but it's normal because you really want to win. Today was not my day.

"It has been a good week anyway. But obviously I'm not here for making finals, I'm here to win tournaments. It's going to be back to work and then we will see what I can do on the clay."

In February, Sinner became the youngest man since Novak Djokovic in 2006 to win two ATP titles and his appearance in the Miami final took him to a career-best ranking of 23rd on Monday.

The Italian was focused on building on his gains and was already looking forward to his next tournament.

"What I showed here (is) that I improved from the last tournament," he said. "Obviously when you get a little bit of confidence it's a little bit easier, but you have to work hard to go deep in tournaments, especially in big tournaments.

"For me, improvement is the most important thing.

"I still have to talk with my team why I lost, what they think, where we have to work ... and then we will decide on which part of my game I have to improve."